Every night from 11:57 to Midnight 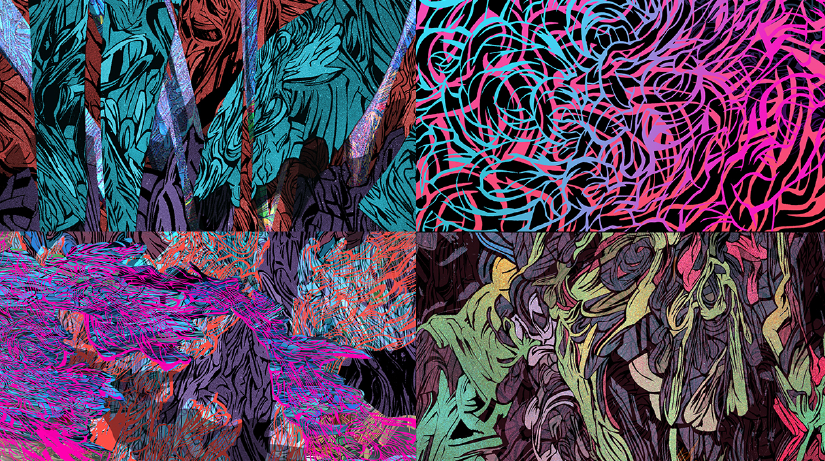 Can you tell us about your process?
My work has always had a great deal to do with intuition, spontaneity and creating in the moment. I bring together the expressiveness of the painted gesture with the immediacy of drawing.

The “carving” effect is still very present in the video work, how did you manage to keep the 3D illusion?
The animation itself is made up of multiple layers much like the work I am known for. In the paintings, depth is created through the physical property of the materials as well as the differences between the textures of the atmospheric backgrounds, brushstrokes and cut lines which give the illusion of depth and three dimensionality. In the case of the animation I pulled from my experience in printmaking because of the similarities between the flatness of a piece of paper and a video screen. In this case you are using visual textures, shadows and scale to create the same depth and space digitally.

The way the surfaces are moving in the video reminds me of a set of a play, but the absence of character is intriguing. Is it what originated the title of the piece? Or is it something more subconscious?
The nature of my work has always been rooted in abstraction and can be very open to interpretation. When I began to think about the project, the two main things I needed to take into consideration in order for it to be successful in my eyes was creating a video animation that moved and looked differently than the rest of the advertising in Times Square. It also needed to engage with an incredibly diverse audience. One thing people all over the world have in common regardless of their backgrounds or where they come from is that we all dream and have imaginations, so the title Dream Season, derived from that idea. In my research I found that Times Square was the beginning point of the Lincoln Highway, the earliest trans-continental highway in the United States that connected New York to San Francisco. I liked the analogy of the road trip of the imagination to transport the viewer out of the chaos of Times Square if only for the short duration of the video.

It is interesting that you mention the set of a play. To capture peoples attention I chose a slow vertical movement because it is different from the quick movements and flashing that we associate with the advertising of Times Square and gives the impression of an elevator ride that takes you to a different place. The video also has moments that allude to a falling curtain in the theater. We are on Broadway after all.

How does the scale of the video presentation affect your work?
Scale has always been a major consideration for me in my paintings. I feel that the physical relation to my paintings for both the viewer and myself when I am making them is what gives them their presence. It is important for me to pull the viewer into another world. The monumental scale of the screens in Times Square will not just pull them in but will envelope and surround them.

Do you have any favorite spots in Time Square? Perhaps a favorite Diner?
I don’t spend much time around Times Square but I have always been a big fan of Jimmy’s Corner. It is a classic dive bar with a great jukebox that takes you to another time in New York history.

What are you working on next ?
I have just finished a special edition screen print inspired by Dream Season, that will be released by Pace Prints on Nov.1st to coincide with my video installation in Times Square. I am also collaborating with my good friend Andrew Yeomanson aka DJ Le Spam on a sound component for an extended version of Dream Season for a large scale indoor video installation.