Interview with the artist duo Michael Elmgreen and Ingar Dragset 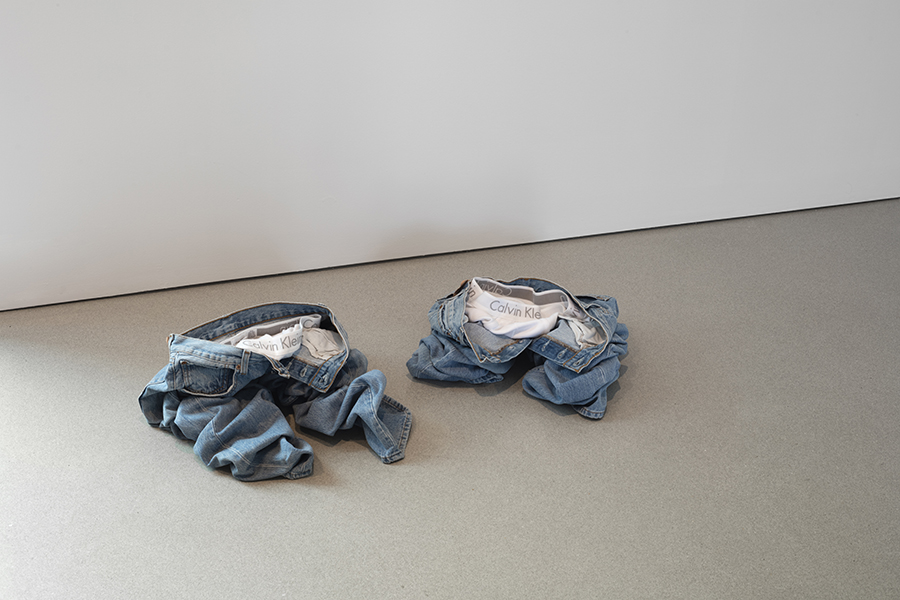 Michael Elmgreen and Ingar Dragset have been chronicling the ways people live, desire, and perish for two decades. With immersive installations, the duo scrutinizes the human condition and its benign and destructive impetuses. Shortly after Van Gogh’s Ear at Rockefeller Center earlier this year, the Scandinavian duo is back in New York for Changing Subjects, an exhibition of historic and recent work at The Flag Art Foundation. The most impressive component of this show is Side Effects, a floor-spanning installation of hand-blown glass jars filled with edible pigments used for coloring the most recent HIV medication. Installed overlooking the impressive Hudson River view at Flag, the installation allures the audience with the pristine and compelling aesthetic of glass urns filled with powdery tones of pink, yellow, and blue. The strong political undertone Elmgreen & Dragset implements, however, ignites discussions around the intrusion of public into private and the stigma around queer bodies. I interviewed the duo before the exhibition opened its doors to the public and the United States elected its new president.

Osman: The subject remains fluid and adaptable in your body of work. However, each subject is interchangeable and in conversation with one another. The kid in The Experiment could be the baby in Modern Moses or he could be sporting the denim pants in Powerless Structures before having sex with the owner of the other pair. Do you ever think you’re narrating one big story from different time periods and perspectives?

Michael: We’ve been collaborating for twenty years now. When we invent a life together, that life is a mixture of us: one part reflects Ingar’s life and things that inspire him, and the other part reflects my life at that moment. It could be the same person, but it could also be different kinds of people and lives around issues of identity and masculinity. This exhibition includes many existing works, but they suddenly gain alternative meanings within new settings and alongside new bodies of work.

Ingar: We are interested in our own biographies and choosing what stories to tell based on them, almost as if there was a person between us and we were narrating the story of that person. The nature of collaboration requires us to understand that there is a certain complexity in togetherness.

One of your obsessions is absence, the void absence creates. From the pool you installed at Rockefeller Center earlier this year to Go Go Go! and Powerless Structures in this exhibition, your works are devoid of their agents or subjects. Is this a result of a pessimistic point of view or is it a decision to leave narratives open-ended?

I: We are definitely interested in leaving the narratives open-ended for the audience to fulfill. In 1997, we created a diving board sculpture as part of the Powerless Structures series for the Louisiana Museum of Art. We installed the piece almost like an actual diving board penetrating the window. The piece looked like something you could interact with, but obviously jumping from it would have hazardous results. This denial of interaction and function helps the audience stimulate the brain and their emotions in different ways. This was repeated in the empty pool sculpture we presented in New York earlier this year and of course Prada Marfa in Texas as well. Two days after the unveiling somebody had tried to break in and take everything inside the store. Now people use the shoes as targets to shoot at.

Side Effects is a very political piece, maybe the most overtly political piece you have created. You compare what people think about HIV and its prevention to what the reality it is by “sugar coating” the subject matter. These jars, with their pristine looks, and the reality of dying from HIV/AIDS related complications, all seem so far from each other.

M: Of course it is great that the pharmaceutical industry invented a medicine that helps people survive if they have HIV today, but on the other hand, because there is a medication to help people who live with HIV, less resources will be put in for research and information, or less people will write about the subject because probably there will be a smaller number of related deaths. In short, it won’t be “hot news” for media anymore. Also, there is no big decrease in the number of people contracting HIV. And more importantly, this medicine is not as harmless as it looks. These “cute” pink and blue pills are highly toxic for the liver and kidneys, and they effect bone density. The medicine industry unsurprisingly chooses these innocent candy-colored tones to promote this type of medication. When we showed them the first in time Milan, there were kids opening the jars and sticking their hands in them thinking there is candy inside. In London, where we also exhibited this work, one out of every eight gay men lives with HIV.

When you go to gay dating websites today, people who are HIV negative call themselves “clean,” suggesting that you would be dirty otherwise. Stigmatization is not only in labor or the pharmaceutical industry, but also within the gay community. There is a lack of information and lack of conversation about the issue in the media. Mike Pence, for instance, declared that all funding for HIV/AIDS should be cut and allocated for cancer research. Such radical views still grab interest. On the other hand, considering how the entire history of activism is a part of New York’s DNA, showing this piece here is very important and satisfying for us. All the trauma and misery in the past had a positive impact as well. The conversation around this issue is much larger than it was during the ‘80s. Also in the art scene this conversation has become much more apparent. There are more gay artists doing work about their sexuality.

I: It should also be noted that saying you’re HIV positive in your workplace or within you family is still not easy anywhere in the world.

Sculpture is a very important element in your body of work; however, the medium seems to be a tool, but never the main element. How do you consider sculpture within your practice?

M: We like to be experimental by using different kinds of materials and seeing what the most appropriate material is for what we want to say and how we want to express it. Walking around Chelsea, we came across so much stainless steel in architecture that we had to incorporate that. Therefore, using a considerable amount of stainless steel was intentional. When you walk around this exhibition, you will see this influence, from the ATM machine to the sculpture of the boy looking through binoculars outside. No matter what gallery you go to, you see this material here, and we wanted to contain that feeling.

I: Stainless steel also adds a sterile and clinical feeling to the work. None of these works stands as a typical sculpture. They exist within a specific situation taking cues from their surroundings. We use sculptures, but they serve to tell bigger stories; if you look at denim pants on the floor, or the boy looking at himself in the mirror, there are whole narratives around these objects or sculptures as we discussed earlier. 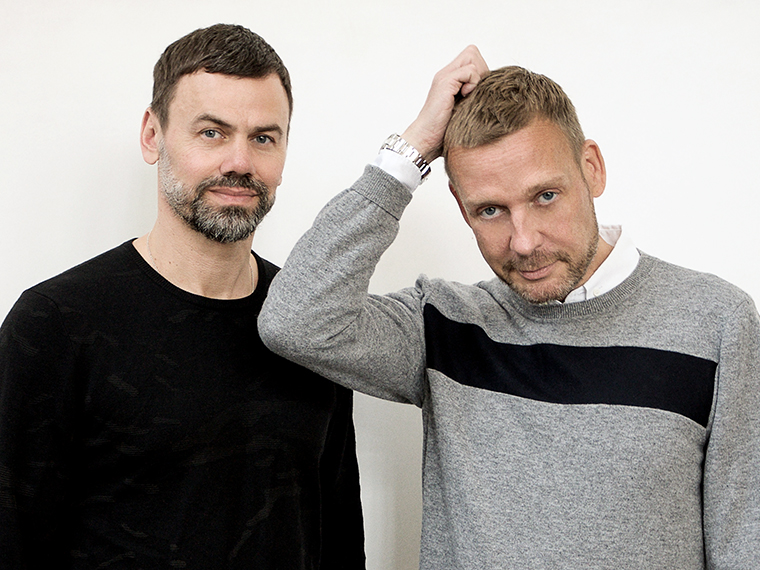 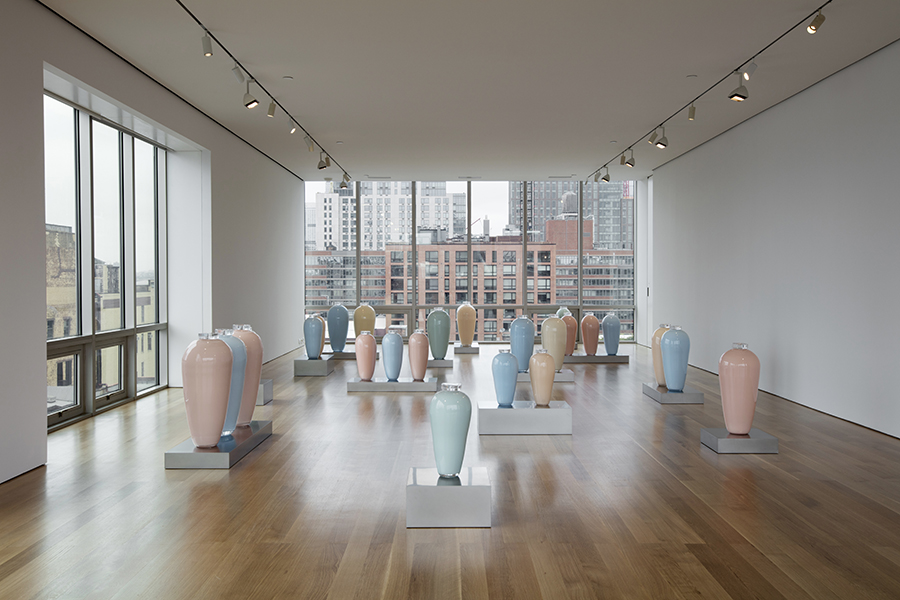 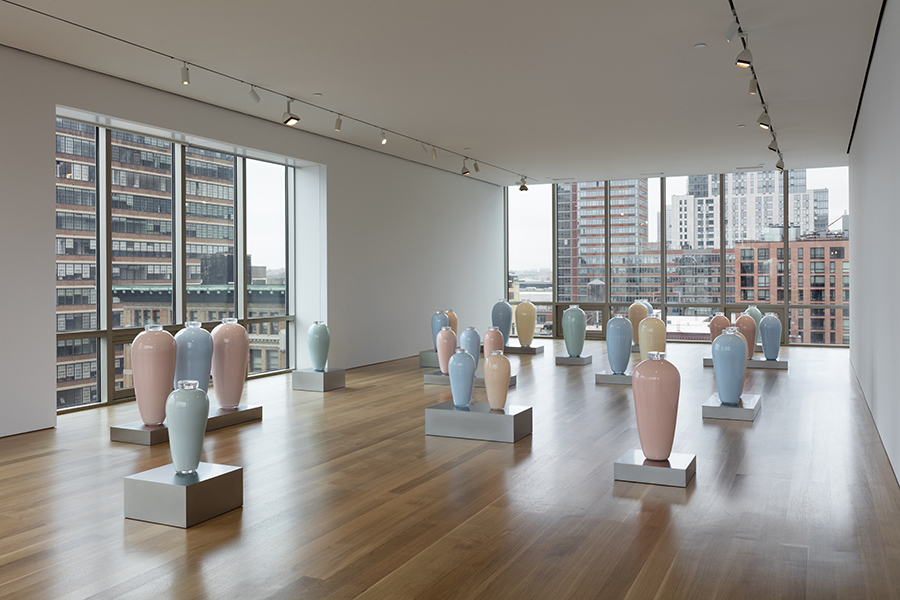 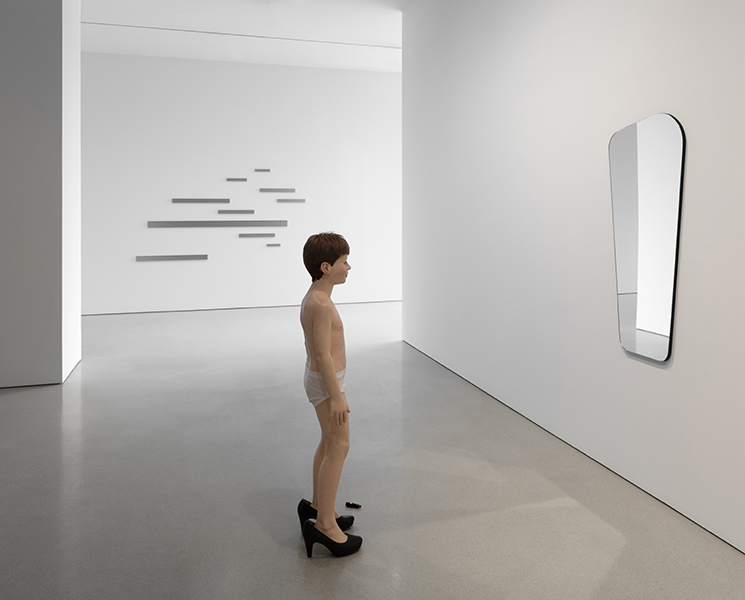 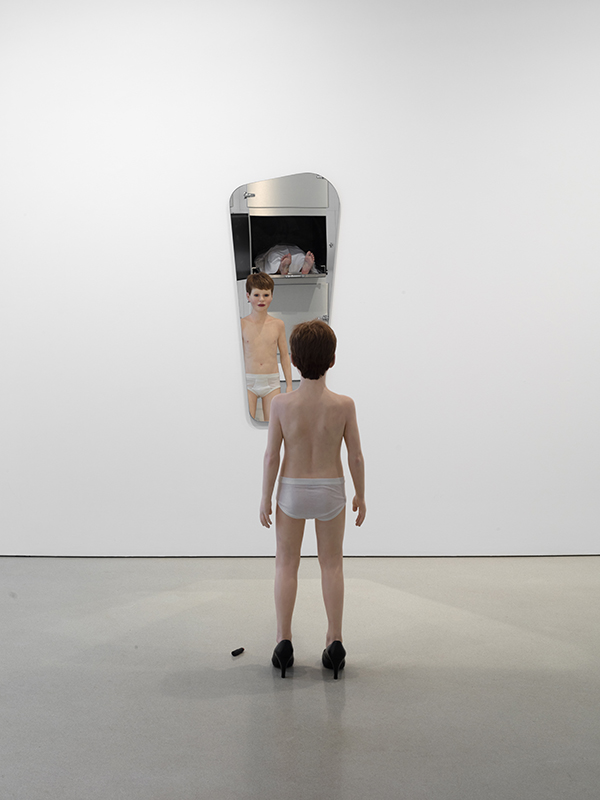 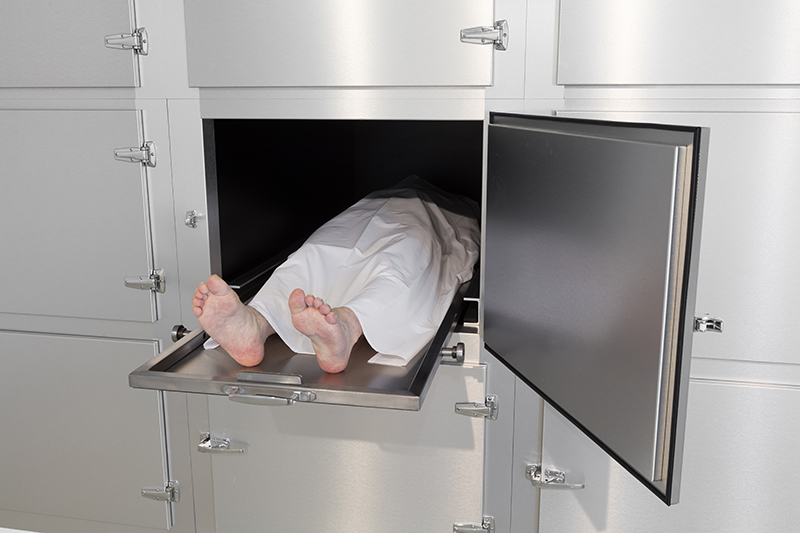 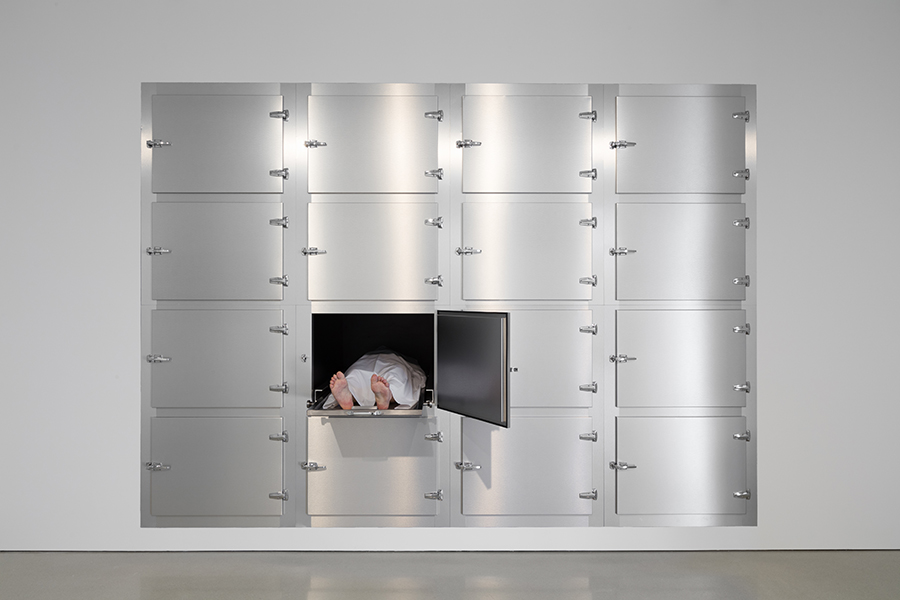 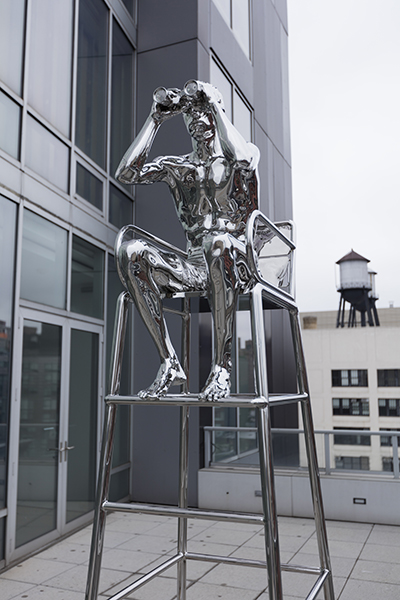 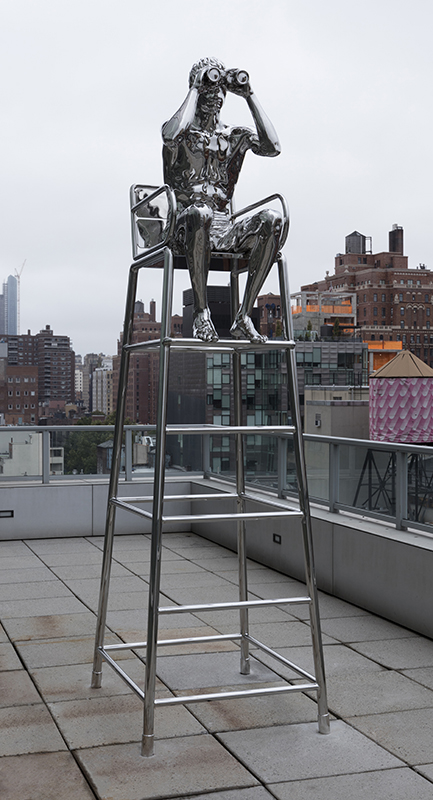 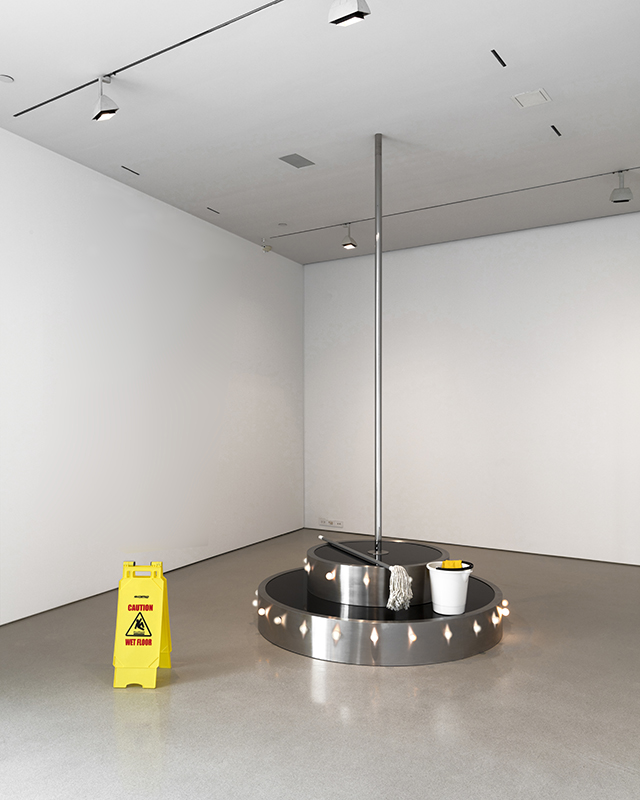 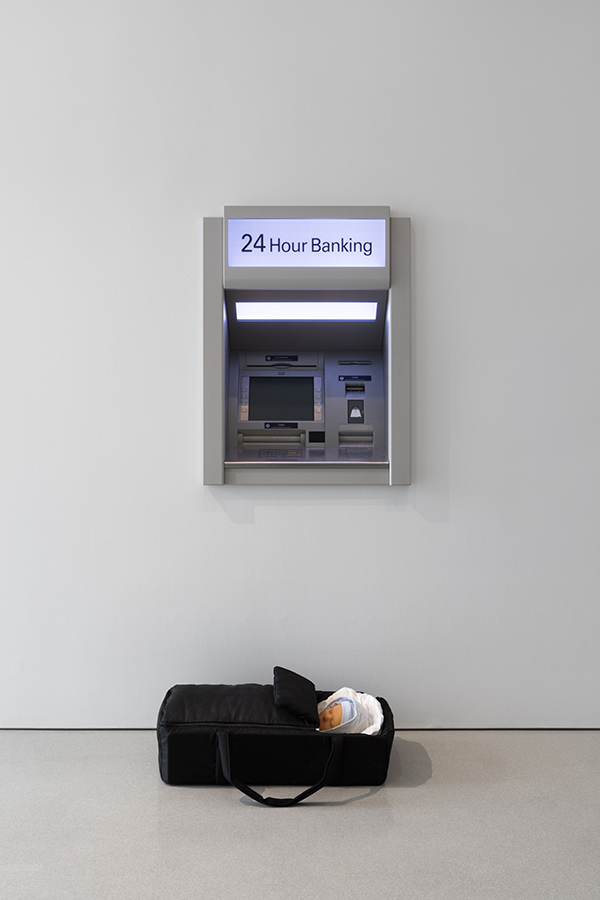