EXCERPT #1
from “Clearer Than Anything Else”
by Abigail St. Clair Thomas 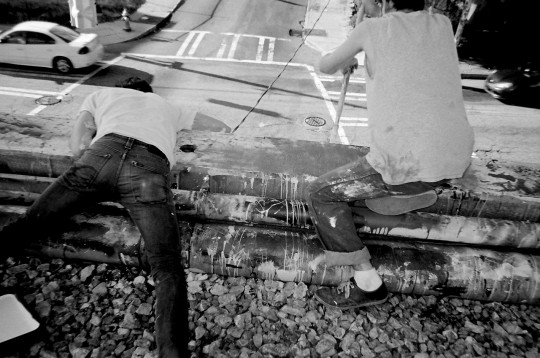 It’s hot in Brooklyn in the summer and where I was it felt like everyone was young and sweating and walking by the river. It’s good to walk longer than you would by yourself with someone else. After a while, my friend and I laid down on a half yellow half white reclined chair facing the bridge at an angle where you could see its underbelly; the metal twisted and arched like that, made to support a weight I couldn’t guess. But I tried. I took her sweating water bottle out of her hands and drank more than half of it before I realized what I was doing. I let the water sit in my mouth. We looked at each other. Someone told me once one of the bridges that surrounds this city was so long when they made it they had to consider the curvature of the earth. I forget which one it is and who told me that. I didn’t say anything.

I realized I had known her for ten years when I relaxed and really got to look at her. Even in the dark of the summer night with lighter shades from the dirty yellow of the street lamp above us I could see that same red curly hair and those same dark brown eyes and we might as well have been twelve again. I resolved then that she and everyone I knew from when I was that young looked exactly the same to me and that I was glad for that and hoped I looked the same to them, too. We got quiet and talked about the prospect of getting older, then louder and about how every time you really love someone part of you thinks you’ll be with them forever and what a drag that is. Then quiet again about how we were so young and many more years that feel and change us like lifetimes will pass before we end up where we’re going. I got bit by a so many mosquitos while I sat there with her my legs were a canvas for a constellation of swollen, pink dots. She said she remembered that about me, that I always got all bitten up. I was comforted by her saying that.

When we left Brooklyn we got lost and ended up watching the right train pass us by from the wrong side of the tracks. After a certain time in certain parts of New York trains go from semi regular and reliable to completely unpredictable beyond the sounds and the wispy lights that grow out the end of tunnels. I was fighting to keep my eyes open but thought the extra hour and change was okay because even though we made a plan for the next day I think part of us knew it would really be a long time until we saw each other again. We emerged after our long haul home to a hard summer rain that made us laugh and I did end up leaving before I saw her.

——-
The first and only thing I put up in my room was a postcard for the movie “Contempt”. I stuck it straight across from my bed. It’s got a cartoon woman in a red towel staring straight at you and half of a man, his foot on the couch behind her and half of his bowler hat covered head. “BARDOT GODARD” is written at the top above the film title in grey. The first and only time I saw it was in high school. I drank a lot of wine in the theater and thought the way they fought throughout the film made me uncomfortable and then I thought maybe that was the point. I saved the postcard because I’ll always like the person I saw it with and I don’t know if I was just drunk but I ended up being convinced it was a beautiful movie.

“I forget you went to college right after high school.” You’re my boyfriend now, I guess, and you’re talking to me in your bedroom.
“I was eighteen.” Until I met you, I had never been made to feel like being in school for 80 percent of my life was a choice or strange.
“Yeah. Crazy.” You nod and stare off into space as though the air in the room is thick enough to really focus on. “I forget that, most of the time.” I almost get offended. Then think of how college wasn’t a choice for me.
“You took-“
“A long, long time off. I’ve seen a lot of kids break. They get out of school camp and realize the idealism is gone and the real world is bleak and relentless.” You look out the window and open it. A breeze comes in and I cross my arms. “The reality that you need to fucking eat.” You look at me dead in the eyes like I’m supposed to say something important in response but also stay quiet.
You go off on tangents a lot about how everyone hates poor people and how you don’t understand that and how Baltimore is a dead metropolis, the city god forgot, but it’s got heart- a lot of heart. But this time you don’t. I am almost sorry. I hold your stare wordlessly and I put my hand on yours and press down without holding it. Even though I don’t think you know as much as you think you do about the world and I’m certainly not sure of enough to really correct you I appreciate what you get worked up over.
“I have this weird feeling I’m going to be ok.”
“I think you will. I think you’ll find something you like. It might take a while, but I think you will.” You hold the coin of my necklace in your hands. It’s rusted from wearing it every day now, even though the wolf man told me that that would never happen.
“I think you will too.” I’m startled by meaning it. I think of this time like I’m remembering it already; the uncertainty of being my age slips away from me every day.