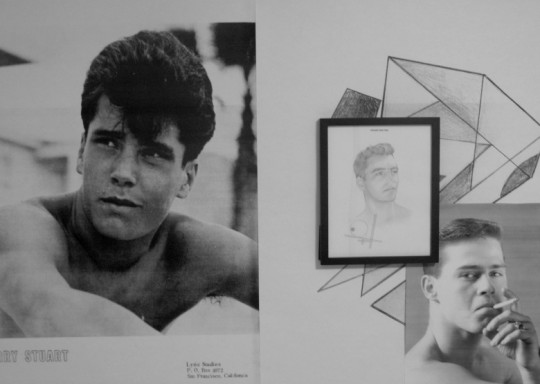 THE NEW MODERN HAIR is an artistic representation of the subtle nuances and cues that help define the male persona, identity and representation within the parameters of visual and popular culture. With her book THE NEW MODERN HAIR: A STYLING CHART as departure point, Prada has created a series of drawings, poster montages and large-scale murals, capturing the typecasting and idealized character building that has become ingrained in our minds through media, pop culture and iconography.

The portraits – with titles ranging from The Flat Top to The Sportsman and also to Executive Contour – pay homage to vintage barbershop imagery and are juxtaposed with didactic geometric drawings; all loony remixes of 20th-century art movements such as Bauhaus, De Stijl and Russian Constructivism. Each geometric composition highlights the role of shape in stylistic creation, commanding a manifesto for the references that the portraits point to. The poster montages illustrate the vast and extensive research Prada conducted for these works and contextualize their temporal framework of the 50’s, 60’s and early 70’s.

THE NEW MODERN HAIR is a continuation of the artist’s fascination with the production of identity, human aesthetics and the ability to objectify all things POP.

An accompanying magazine and first issue of THE NEW MODERN HAIR will be published by cultureEDIT and available February 1st at select retailers and newsstands worldwide. Featuring text by Miguel Figueroa, US Editor of Fanzine137, Candy and EY! Magateen

Silvia Prada, born in Ponferrada, Spain, lives and works in New York. Her work as an illustrator and decorative artist is a monochromatic and geometric documentation of pop culture, capturing at times a fetishistic representation of select defining moments and iconography. Prada stepped into the illustration and art scene in 2000 by producing works for the now-folded The Face magazine, and has since received assignments from magazine clients including V, BlackBook, Dazed & Confused, Fanzine137, Candy and EY! Magateen. Her works, which include large-scale illustration as well as poster installations, have been exhibited in galleries and cultural institutions worldwide such as Colette, MOCA Shanghai, MUSAC and Deitch Projects.