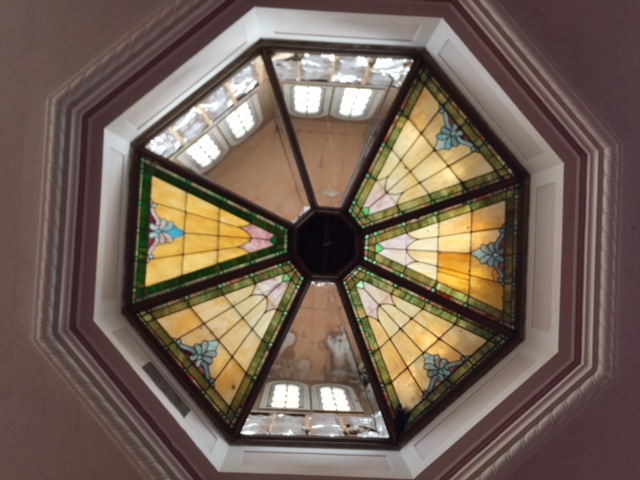 Upon scouting locations for the Portland Biennial, Jessica Jackson Hutchins immediately fell in love with the Christian Science reading room in Pendleton, Oregon. What was once a space for believers of healing through prayer looked bereft. Its wall-to-wall red carpets were faded, and three missing windowpanes in a central oculus flooded the room with natural light.

Hutchins described it as dilapidated. “It was beautiful,” she recalls.

Hutchins is about to complete the centerpiece of her show: three stain-glass wedges that replace the oculus’s missing segments – her first time working with the medium.

We spoke about how casting aside deadlines and creating art for an unconventional space was a liberating, meditative, and healing process.

Is it exactly as you had envisioned?

Well, if it was exactly as I had envisioned, I wouldn’t be as excited. I’ve been more excited about the process of translating my sculptures, which are found objects, into a sketch, and then into lead lines. I’m also excited about seeing how light filters through colored glass, changing at different times of day. I’ve never worked this way before.

I’ve been working with a stained glass professional. I brought him sketches and photographs of the artwork, which he then redraws them with lead lines, because only he knows where those lines need to be for structural soundness. And then I choose the colors of glass. I use opalescent colors to make objects seem more solid and distinguish them from the background, or try to define and push the perception of space.

Now that I’m working with stained glass, I’m reading the aesthetics differently. There are moments where I say to myself, the space is too packed with information. I can feel the original church window-makers saying to me, “There’s still more opportunity to change colors!” But, I have to dial back at times just to privilege certain kinds of information. I deal with ambiguous iconographies, which are less readable than, for example, a flower or figure of Jesus.

There is one component in the stained glass that is readable, which are these alphabet letters.

Yes, I’ve been reading a lot about Vimala handwriting, which is a kind of cursive. I read this book, The Soul DevelopmentThrough Handwriting: The Waldorf Approach to the VimalaAlphabet, which claims that people who use this kind of handwriting have more independence and self-assuredness, which suggests that this handwriting is key to something. I’m interested in the kinesthetic, or the innate wisdom in our bodies; it’s not respected enough in our culture, although it’s very important for a sculptor.

I’m also interested in esoteric philosophies or esoteric thought around our basic aspects of life. Roy Lichtenstein did it too, and so did Indian philosophers, who wrote about the mystical potential of language. Religion does that. Stained glass does that. Artists do that. That’s what I’m interested in — the mystical potential of the objects around us.

Can we talk about your relationship with religion and why you refer to it?

I do like to signal the potential for mystical thought. My last exhibition, Confessions, at the Douglas F. Cooley Memorial Art Gallery, emphasized the power of transcendental transformation. You can tell a narrative, but a confession implies the transformative power of the story. A confession is an act that is supposed to be either redeeming or incarcerating.

For the Portland Biennial, I’m showing in the Christian Science Reading Room. At first, it just seemed like an opportunity to intervene in a space that wasn’t a conventional museum or art space.

My mother was Christian Science for a couple of years. She died of Lou Gehrig’s disease when I was a kid. She became involved with Christian Science as a last resort, because there wasn’t anything anyone in the medical world could do. But to me, there’s a lot of interesting thematic content in Christian Science relating to my work and the way I talk about the power of objects, thought, and poetry.

I’m not validating its concepts. If anything, I’m a polytheist [laughs] or an omni-theist. I just believe in the transformative power of objects. But, that is a kind of religious sentiment, isn’t it? The beauty of a painting can change you by giving you access to a different language in that moment.

Because the humanities are hard to quantify as effective, right?

Exactly! There is really no quantifiable reason to put in stainedglass windows in Pendleton. Nobody really cares that they’re there. No one is paying you for that.

But art saves lives all the time. I know it does, because it saved mine.

People have become divorced from the importance of beauty and magic. Why does everything have to be practical? Aesthetic experience is crucial to human lives.

The kinesthetic is something encouraged by Vimala text, such as writing letters as opposed to typing. It’s my experience that real human compassion takes place in the body. The more divorced we become from our body, the less we are capable of that compassion. That compassion is essential for what we need to change the world that needs changing. That’s one of the reasons why my work is very physical.

And how has the context of the Portland Biennial influenced your art-making?

It’s been harder, because there is no institutional support, but as soon as I saw those windows, I had to make it happen no matter what. I knew the windows weren’t going to get done until after the biennial was supposed to close. I only have a verbal agreement with the landlord to put the windows in. So I’ve just gone rogue, because I’ve become very passionate about doing those windows. 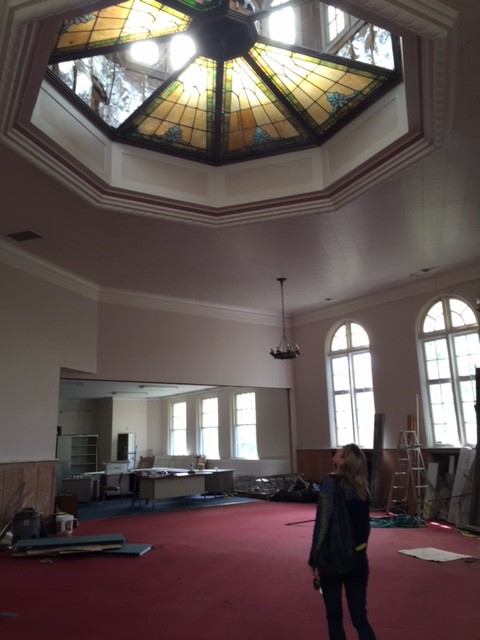