Artist, Micki Pellerano, discusses his work, music, growing up in Florida and his upcoming show at envoy enterprises. 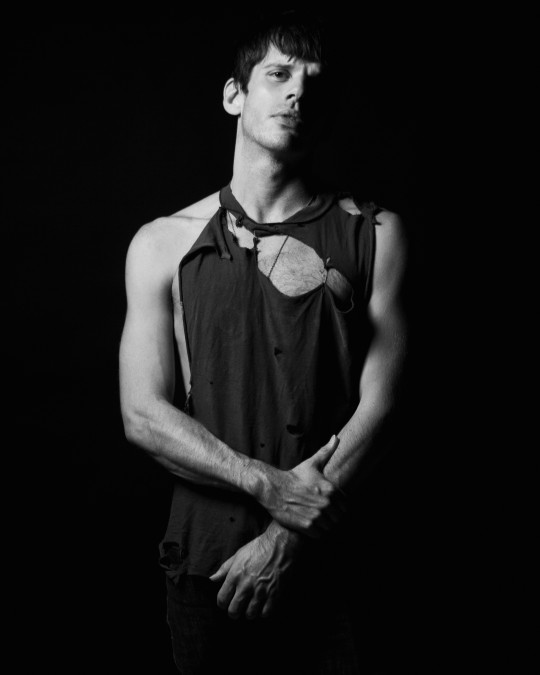 At the beginning I like something really spacey, something that gets me thinking on a cosmic scale. Ash Ra Tempel, Amon Düül…or maybe Sun Ra or JG Thirlwell’s Manorexia.

When I want to invite current of force into the studio I’ll listen to something harsh or aggressive, particularly Total Abuse, this hardcore band from Austin. Their drummer is the best. Percussion is so important in selecting the right studio music.

Recently I’ve been listening to Pharmakon and other experimental noise music, just to really break out of linear modes of thinking. It really helps.

How does the music relate to your art?

Music is about fantasy. The best music forms landscapes in the mind that are intensely visual or multi-sensory. So it stirs up a visual atmosphere the artist can draw from, and also has rhythms and accents that the body can respond to during a manual act like drawing or painting.

Describe your art in one word

What do you want people to feel when they view your work?

I want people to get the sense that other realities are indeed very real. I want them to get all lusty and excited about their own experiences of other dimensions.

We understand that you were moving to a few smaller pieces, tell me about those.

I was studying this book where the stages of alchemy were described as processes that the alchemist experiences, sometimes as trials or pressures, in order to shed certain aspects of the self and develop new substances of one’s own nature. On a certain level it can be described as ‘dying before you die.’ So I started this one piece depicting a sheet of ‘soul-matter’ being separated from a body suspended in a black void.

Just then my friend Elias contacted me from Copenhagen, he’s in that band Iceage and he wanted a drawing for some album art. I asked him what he had in mind and he said he was envisioning the body at the moment where it was being separated from the soul. I was blown away and told him that was exactly what I was making at the moment.

Coincidences like that are really meaningful. I went on to construct a series, basically these little emblems of interior alchemical events, often as they were happening to me. Sometimes the most dramatic events of our life are interior, and solitary.

How do you know what paper to use?

That depends on the piece, but in general I like a nice smooth surface with just enough texture to pick up certain subtleties of stroke.

What’s your favorite type of pencil?

I like the Faber-Castell 9000, and I also use the Staedtler Lumograph a lot.

How does symmetry play a role in your work?

The peculiar thing about symmetry is that if you take a fragment of a room or a landscape, and you mirror it upon itself, it takes on the appearance of some sort of altar or shrine. It’s a motif that we see a lot in great filmmakers like Kubrick, Alejandro Jodorowsky or Peter Greenaway. By accentuating the symmetry of a scenery and working masterfully inside it, they transform it into a sacred space. They create a ground that gives you the impression that something very monumental is about to occur here, that this realm is a just a metaphor for an interior psychic space or a macrocosmic universal space. It’s very powerful. 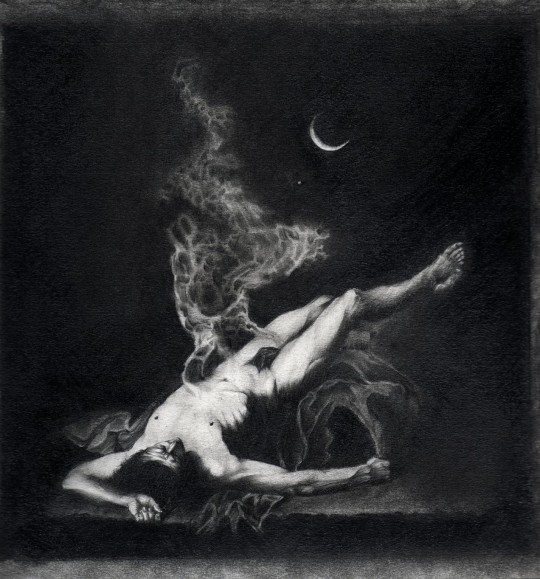 Separation and Monolith by Micky Pellerano

We understand that you are very close with some of your favorite artists, can you describe a few of them?

Raul De Nieves has been a close friend and collaborator for years. He’s one of the best artists around, a true force of nature. He makes these totally fucked up paintings of St. George and the Dragon that are just spectacular. He also constructs these amorphous platform shoes that look like glistening sea creatures or jewel-encrusted coral from another universe.

I think Christian Holstad is the great alchemist of our time, and one of the wisest people I know. His abilities to transmute materials and create universes are truly divine.

There’s also Scott Treleaven and Elijah Burgher. I have a deep affinity and respect for these artists mainly because of their commitment to magic and how it permeates their work.

Describe your life, growing up in Miami.

Miami gets a bad rap but it’s actually a very cosmopolitan and exotic place. There’s all sorts of bizarre little treasures there if you know where to look, and it’s very beautiful.

Is there someone in your family that has influenced your work or aesthetic?

My family is from Cuba, so the older generation in particular made a huge impact on me. They were so stylish and Baroque, and they had a very intense way of being Catholic that was rather mysterious.  Statues of saints painted with rich oils with bleeding eyes or gaping wounds, religious reproductions of Dali that seemed somehow obscene. Altars packed candles and inscrutable little devices, crystal decanters of strange colored liquids, swords on the walls. It was pretty wild, I’m not making it up.

I understand you have a very eccentric aunt can you describe for a bit?

My Great Aunt Yoya was definitely the prime example of all that. She had long black hair down to her knees that she always wore tied up in a big bun, with big black Gucci sunglasses on inside the house at all times, and French lace blouses that she had ordered from Paris to Havana in the 1930’s under velvet blazers. She lived in my grandmother’s house as well, and the altar in her room was very impressive.

She was awesome. She would always let me play at the altar and light candles and set things on fire and stuff when I was a little kid. It made me feel like a sorcerer. Ritual always seemed so enticing and romantic.

can you explain a bit about that?

Performance art in general has such an element of camp, even when it’s not meant to. My performance art allows me to indulge my offbeat sense of humor a little more. But the performances are still meaningful, and driven by the same ritual forces I call forth in my drawings and films. My work directing music videos has been great for this too because I think it allows for a sense of the macabre and humorous to coexist nicely.

Name five books that have influenced you

Maldoror by the Comte de Lautreamont
Cities of the Red Night by William S. Burroughs
The Saragossa Manuscript by Jan Potocki
Book 4: Parts 1-4 by Aleister Crowley
Heliogabalus by Antonin Artaud

How do you know when a piece is finished?

Sometimes my stern side has to intervene and say “Ok, it’s done.” And then I leave it alone or store it, and then when I take it out again there’s always a touch or two I have to give it. Then I’m done.

If a drawing is a solitary ritual whereby you create a talisman or a monument out of the symbols you have invoked, a performance – or even a film – is a live ritual act, with other people participating as representations of certain energies. During the filmmaking process, though, the audience is an absent abstraction. Performance introduces the element of an audience to experience it as it unfolds. They are there there to feel the effects of the ritual, and the energy stirred up by its spectacle, and hopefully walk away a little stronger or more inspired because of it.

Do you dream in Spanish?

English. But sometimes people speak to me in Spanish in dreams, dead relatives, ancestors.

The Canada Goose. It came to me in a dream and communicated its secret name to me. Whenever I see one I feel like it’s a very important moment.