“I’m interested in the ways that these materials have the capacity to draw in the viewer specifically because of their familiarity, and hopefully that has the potential to draw in a viewer and open up new conversations.” 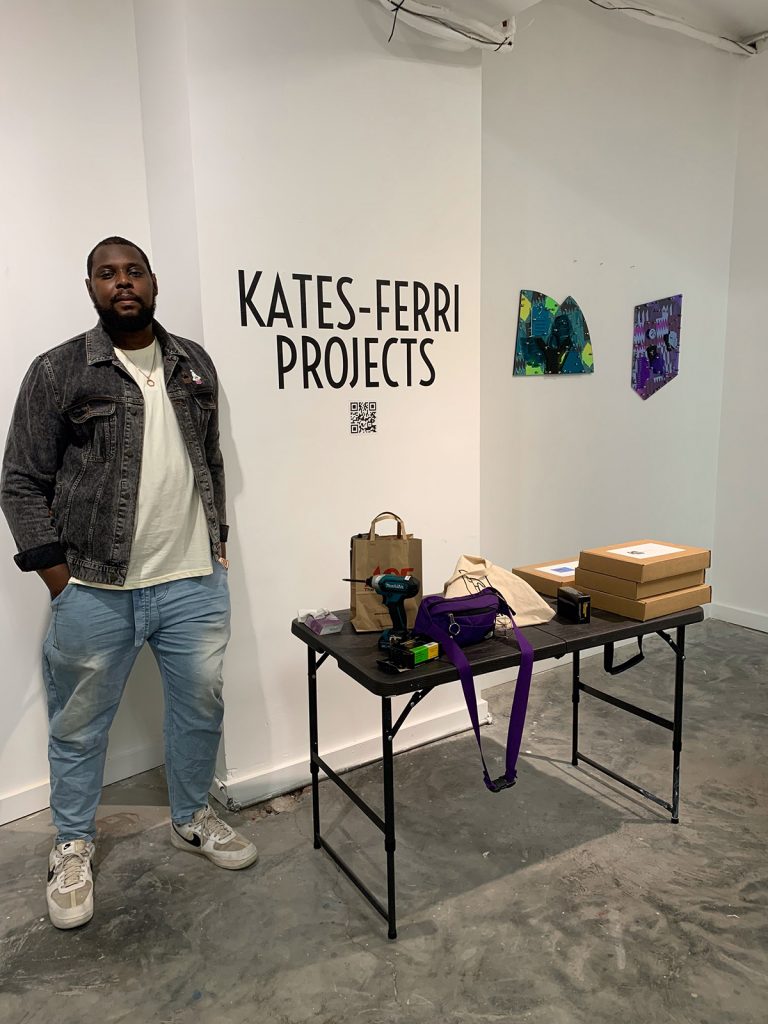 all images are courtesy of Kates-Ferri Projects and Damien Davis

When viewing your work in the room, there is connective tissue between color and form. How do you decide your palette?

It’s not a thing that I can totally take credit for. Often times I’m relying on whatever stock of acrylic I can get my hands on. That, in a lot of ways has been helpful for me in terms of decision-making by having these limited options. This forces me to really sort of think critically about what role color has the potential to play in the work and to exploit that as best I can whenever possible. That being said, there is just some basic color theory mixed into the process, because oftentimes what I’ll do is build out new colors through just layering transparent sheets of plexi on top of each other.

I have seen your work in large and small scale. Is there a preferred size? Does the scale of the pieces have a personal connection to you?

People tend to prefer seeing the work large, though it’s not something that particularly interests me or excites me. As a person that exists in a larger body, making things big for the sake of making them big has never appealed to me. The idea that I can make something small, something delicate, something that feels diametrically opposed to the way that I am perceived on a regular basis when I am out and about in the real world is much more interesting. What does it mean to make a piece that the viewer has to get extremely close to in order to understand and appreciate versus only being able to appreciate that thing from a distance.

When viewing the pieces, I have an impulse to touch them. Was that intentional? How does that relate to you or personality?

I like the idea that the work has this sort of sensual quality to it. The fact that it’s made out of wood and acrylic typically means that you are viewing a piece that’s made out of materials which are hyper-familiar to you. You understand what these works FEEL like to touch them. Not just from a visual standpoint but from all these other sensory access points as well. I’m interested in the ways that these materials have the capacity to draw in the viewer specifically because of their familiarity, and hopefully that has the potential to draw in a viewer and open up new conversations.

Is there eroticism in the pieces? If so, can you discuss?

Maybe it does, but I’m not sure it’s the thing that I am directly going toward with the work. If it happens it happens but sex is probably not something that I think a lot about when it comes to the work that I make to be honest. I’m more interested in thinking about (or thinking through) the ways in which queerness or queer art can manifest itself beyond representation of sex and genitalia.

When viewing the pieces, I am also struck by the level of execution and craftsmanship. How does that relate to overall message of the work?

It’s very much a byproduct of my undergraduate art education (or maybe even a lack thereof.) Through most of undergrad I wasn’t exposed to Black artists, which became extremely frustrating for me. I was constantly being told through omission that there is no space for me in the contemporary art world. The few times that I was exposed to Black artists, the conversations were always couched in somewhat problematic language that denied or refused to acknowledge the potential that these artists had to be skilled, intentional makers, people with real intelligence. What ended up happening was that I started becoming more and more fixated on making work that couldn’t be discussed in that manner, and I started falling deeper and deeper into the computer, which became an obsession almost for me. I didn’t want the viewer to be able to say (when they looked at a piece of mine) that it didn’t require training, talent, discipline or precision on my part. I wanted all of those things to be at the forefront as soon as you approach a piece.

I see a dialogue between the labor of actually doing the pieces and cultural/racial expectations of labor from black bodies. If so, can you discuss further?

What’s interesting for me now is that I’m coming out the other side having pushed myself further and further to make the work that is more technical, more complex, and more difficult to make. I’m realizing now that this maybe is not the thing I should be doing anymore. What does it mean to make work that requires all these specific technological skills but few people are capable of understanding all the skills that go into the production of that piece?

One of the funny things that happens often when people first approach the work is they ask the question, “Does it move?” which always takes me aback and frustrates me. I’ve already put so much technical skill into building the work from the ground up, yet that somehow still isn’t enough for you. It’s very easy to also get kind of caught up in this mind game where you start wondering, is this piece not enough for you because I’m not enough? Is the impulse or the desire to have this thing perform really just you projecting your desire to have me perform? For some, my worth will always be measured in my ability to perform, (either through sports, music, dance, physical labor etc.) but rarely by my intelligence.

These are the questions that I’m trying to unpack with this new show called That John Henry Thing, referencing the folklore of John Henry who was challenged to drive steel in competition with an actual steel driving machine. John Henry beats the machine, only to then die of a heart attack right there on the spot. What does it mean to perform all these technical tricks to produce this work and that still not be enough? With this new show I produced at Kates-Ferri Projects it’s about maybe sort of stepping back, pairing things down and going back to basics in a lot of ways. It also is just about giving people the thing that they’ve been asking for all these years. I’m using the most analog technology to have this thing perform for you by allowing you to walk up to the thing and manually turn the gears.. The simplest component to this work all of sudden (potentially) makes it worthwhile, but at the same time we can start to build a conversation around all the problematic things that desire for the performative may be grounded in. The world demands Black men to perform for the sake of proving their worth in almost every aspect of their public lives.

If these pieces had a soundtrack, what songs must be on it?

Not sure exactly what that one song would be, but maybe I should put together a soundtrack and we can start figuring it out!

Do you ever dream about your work? If so can you describe?

has the potential to afford me, and maybe the freedom I can obtain through making this work… if that’s a real thing.

Those are some of the things that I’m still working through.. things that I haven’t fully figured out how to build a show around. Maybe there’s something about this idea of intimacy or delicacy that I still need to explore. I think that there’s something interesting about the ways in which the work an artist produces having the potential to serve as an avatar for all these other things.

To feel truly wanted and cared for is a thing I sometimes hope the work can help me achieve, but who knows. In the meantime, I’m just going to focus on performing a little less for people.