Bernhard Willhelm discusses his love of cacti,
life in LA and his upcoming show at MOCA. 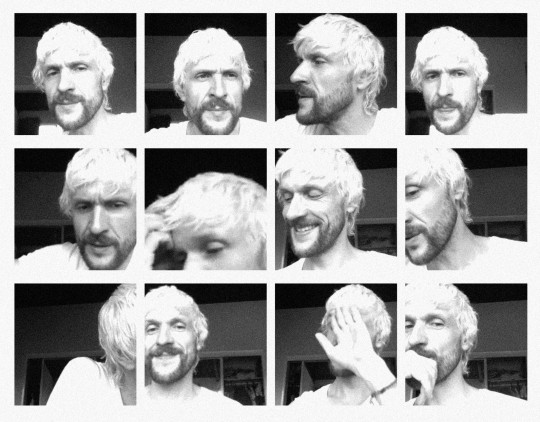 Yes. I’m the blonde one that likes black %#@$. From where are you calling?

New York. We are big fans and we are excited to talk to you about your upcoming show at MOCA.

We want to know everything. So that you are OK with it, we are recording this Skype call.

You are the first person that has asked me this. I am usually the one that controls my image and the hair is a bit of a work in progress. The hairdresser is coming tonight., You can see he still needs to work on it. Last time he did 30% peroxide and the ammonia was burning my eyes, but this time I have to go longer. It burns and it’s painful. Ask Catherine Deneuve. It can be helpful for the career but now I know that Jean Paul Gaultier and Deneuve have suffered a lot.

I will have to send you a video of a guy named Benjie Greaves. He is a bodybuilder and I am a big fan of that sport. In 2002 he did a very important performance against a blue background and that inspired me. You can say a bodybuilder made me do it.

So not Brigitte Nielsen?

No, not her either. There is no one else like her. There is a very funny interview between Brigitte and Joan Rivers on YouTube. It’s very funny because there is a certain dynamic and they are two cats that are really fighting. You must see it.

Oh, I must take a look at it. I was devastated at her death. It was not surprising but she was someone of which I always depended on to make me laugh.

This is what I liked the most about her or just people in general, there is a story over a period of time. You follow someones evolution based on what they do and say over the years and if they still have a sense of humor in the end, that’s fantastic.

This can be said about you as well. It’s been said that your work in the earlier days was a reaction against the minimalism of the 90s.

I think my generation is the generation based on the feeling of “no return”. We don’t know if this planet will survive humanity. This evolved “anti-feelings”. The 90s, of course, had it’s own anti-feelings against the maximums of the 80s. Then the Japanese and Belgium said “less is more”. Then Donatella (Versace) said “more is more”. Then we didn’t know who to give a blow job to. In the end, I prefer “more is more”, but I don’t want to be considered a reaction against something. There is a certain experiment. Something about how far can you go and can you go there in a different way.

I’m curious to see if you’re tired of discussing the past and I was wondering how you think of yourself now versus then.

I have to say that my happiest time in life was in Paris. I had an apartment where I took everything out and carefully put all the things back in. It was my design masterpiece. When I did that I feel in a deep hole. I started wondering if that was really what I wanted to achieve; to live in my little castle.It was perfect. Then I felt too stressed. I worried too much and I needed to move away.

Yes, but why Los Angeles? You had to move your whole business and business partner, Jutta Kraus, out there.

Because I wanted to be in Hollywood. I live in Beachwood Canyon and this is my view (Bernhard moves the camera to show the view from his terrace garden). Also, I have my cactus garden.

I have been collecting cacti sense I was 16. One of the nicest things my parents gave me was a little greenhouse. They live in Germany and they are now 75 years old but they have been taking care of them for 30 years. I now plan to take them to a botanical garden there. The thing about plants is that they need your consciousness and sub-consciousness. Then once and a while you will get a flower. This is why I love them so much. Probably they will survive me.

I find the most peace in nature. If was not a fashion designer, I would have become a botanist.

When you were thinking about show, what where your thoughts on creating it’s title?

Well, of course, I love the musician Andre 3000, so I wanted to use that. The other part about fashion being the danger is about fashion being what you project into it. It’s a projection on consumerism, racism, sexual dynamics and our environment issues. They are all on the eclipse then finally the utopia because fashion is about creating the impossible. No one can explain why fashion is in constant movement. Maybe it’s this way because of the interaction between of all of those things.

The presentation of your work in the past has always been very exciting. Filled with smoke, bubbles and lighting. Was there that consideration in planning this show?

At this age I have decided to be free of my previous presentations. Everything is new and I am still forming it.

Giorgio Armani has been criticized because his previous exhibitions (at the Guggenheim) where thought to be one long product placement. That’s how I want my show be considered. A “Bernhard product placement” but in this context it will be slightly different.

Did you consider your audiences reaction when planning this exhibition?

I actually think it’s interesting how fashion has evolved to such a place where it is in a museum. It took a whole period in humanity for it grow to this. Whether a painting, a design object, clothing or performance, fashion deals with all these aspects and people see it that normally do not go fashion shops. It’s about an experience and a conversation.

Well, I like old paintings so I go to the Louvre, The Gemaldegalerie and the Getty Museum. The Getty has a great collection from the Golden Age and from Holland. They had taste.

I’m curious about what art era you like the most.

Strangely enough, it’s the Golden Age and the Italian Renaissance I can’t explain why or where it comes from.

I usually don’t have the same connection with contemporary art. If it is something interesting it’s the story behind it. That being said I like Iza Genzken and Wolfgang Tillmans. Maybe that’s because it’s linked to my culture and my past. I always need a bit of connection.

What do want to museum goer to walk away with when they leave the show? What do you want them to think?

Maybe I want them to think, “oh, this is sexy”.

Oh that’s very surprising because you blend so many social and environmental issues.

But you have to remember that it is still something very visual. Of course everyone will interpret it their own way.

For me it is about proof. Proof that thoughts become objects. Do you understand what I mean?

What do you think people would be most surprised about you?

It’s the good, bad, beautiful and ugly. I don’t have to make people happy anymore. I’m a different person than I was 10 years ago.

Do you remember your dreams?

BW: No, I don’t. Being a fashion designer involves a lot of day dreams so at night I don’t dream very much. Is that strange?