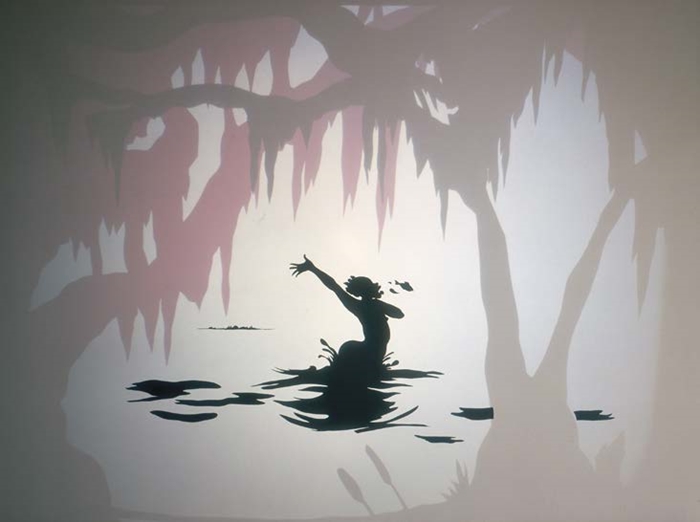 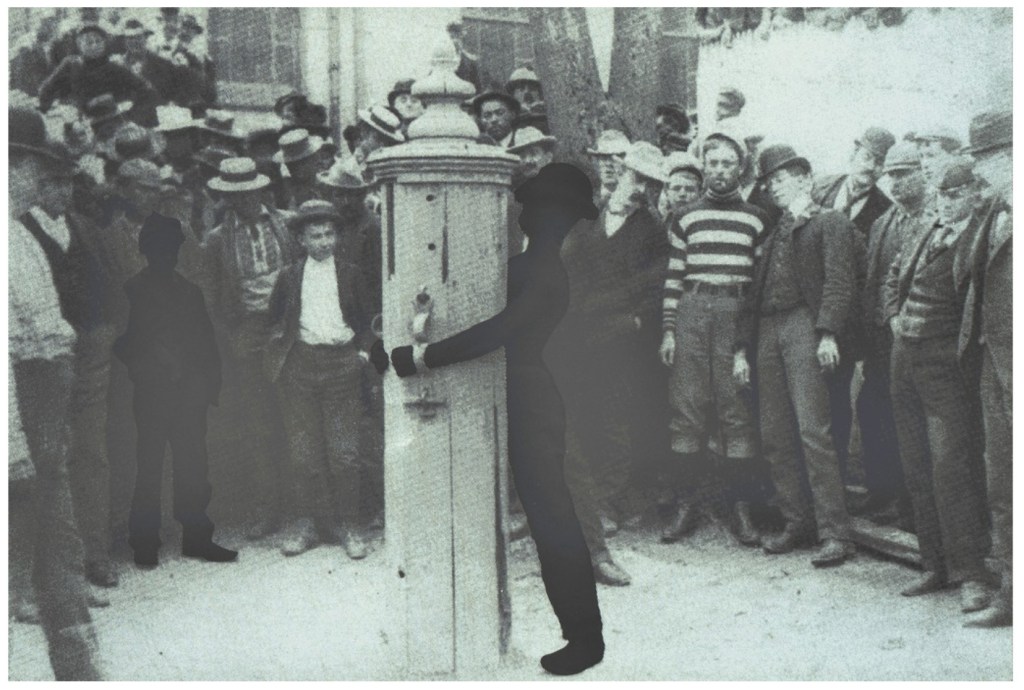 Currently on view at the Baltimore Museum of Art, Kara Walker and Hank Willis Thomas’ joint exhibition in the Black Box space creates a chilling monument to lost memories. The installation, on view through March 18, 2018, reminds me of the first experience I had with artists grappling delicately with the history of racism and segregation in the United States. In 2014, artist Dread Scott reclaimed the agency of the black male body by walking against a live fire hose, used for crowd control during the civil rights movement marches of the 1960s, for a performance art piece with More Art at a site in Brooklyn. The artist furtively struggled for the better part of an hour against the pressure of water forcing its through a firetruck. Watching his movements, onlookers felt frozen with anxiety as the artist moved left and right, forward and backward. This oscillation of movement finds a corollary in Walker and Thomas’ depictions of the black body in the space of American history.

Where Scott employed brute force, Walker commands a historically genteel cut-paper format to dissect the meaning of subjugated black bodies within the space of a “free” American society in our shared history. Walker’s process is especially aestheticized, and the cool beauty with which her figures and landscapes are depicted are continually at odds with the subtle danger lurking within the mise-en-scene. Desolate swampland surrounds the figure in her work “Salvation”, in which a female figure marked by overemphasized features in the vein of former minstrel stylings, struggles and clasps her throat. The scene is sparse, the message in literal black and white. Shadowy trees result from a projection that literally form a halo around the figure, meditating on the power of forgotten and suppressed memories.

Where Walker reveals, Thomas revels in obscuring with is “And I Can’t Run”. Adapting a silhouette process similar to Walker, Thomas shows a crowd of white men gathered in a town square, the photo borrowed imagery dating from the early 20th or late 19th century. Flanking this homogenous crowd are two blacked-out figures. Reflecting on the image, questions arise of freedom and bondage. In our society, images from the pre-Photoshop era are generally taken at face value to convey undiluted information. Here Thomas’ choice to obscure the figure in bondage, a figure revealed only when the viewer takes a flash photo, adopts agency in its retroactive view of omitted information: who omitted what? Are there other hidden aspects continuing to today that remain exclusionary? Do we exclude that which we don’t wish to see? How sustainable is this practice?

Walker and Thomas display works that reverberate much the way Scott’s work oscillated for onlookers: each artist probes the boundaries between known and unknown, spaces were legacies are keenly questioned and shadows become manifest. This black box installation is on view through March 18, 2018 and is curated by Kristen Hilleman, Senior Curator of Contemporary Art at the Baltimore Museum of Art.