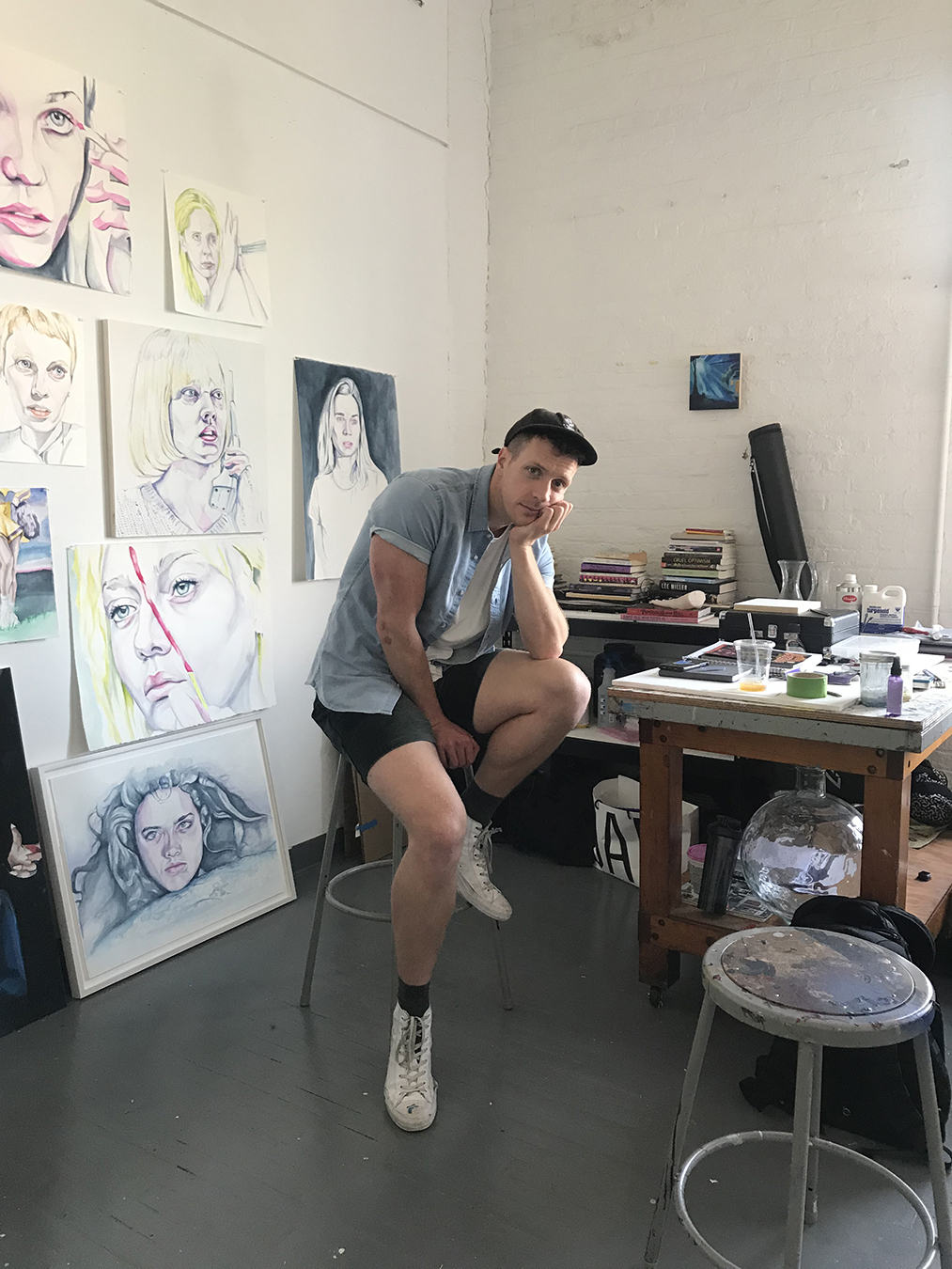 all images courtesy of Thomas Tomczak

Where you always the tallest in class?
Second. I remember lining up in order of height in elementary school and always being the second tallest person in class.

Did you outgrow the tallest guy?
Yes, I ran into him on the street years later and I was taller than him.

Where were you born
Greenpoint, Brooklyn

Wow. Born and raised in Brooklyn. That’s rather rare.
People always say that. I think I take it for granted.

What was the neighborhood like?
Almost exclusively Polish and very Catholic.

Do you speak Polish?
i do.

I understand that Polish is a difficult language. Not sure if that is true.
I have heard that too. Knowing a second language made it easier when I was learning Italian and French in high school and undergrad. Granted, I don’t remember much of either.

When did you first discover Buffy The Vampire Slayer
I saw the movie first at about the age of 7.

Ok that is so different than the show. How feminist is the movie vs the show?
I think there are some elements in there as it’s an origin story.

Is there a season you love the most?
Season 2. Buffy falls in love for the first time, has her first real heartbreak, and then she has to survive the aftermath of that. There’s a lot about how loss shapes you as a person and the choices you make in the face of that. Its something that has really resonated with me. Season 6 is also really great for the existential crises.

Did you ever cry watching Buffy?
Yes. I always get choked up watching the season finale of season 2. The scene where Angel is about about to kill Buffy and taunts her by asking whats left after listing off everything he’s taken from her and she responds, “Me.” I held onto that sentiment through some seriously dark periods in my life.

Is there an episode you laugh every time?
“Doppelgangland” This is the episode where Willow is tired of being taken for granted and accidentally conjures the vampire version of herself into Sunnydale.

Now that it’s been 10 years since the series finale, has anything changed with you?
Definitely, I think aspects of the show have taken on new depth as I’ve gained the experiences to relate.

There is something about taking the trope of slasher films and flipping that narrative in Buffy. This goes against much of the victimhood of women in horror. Buffy seems to be stronger than the other victims.
Growing up as a gay boy in a world that felt aggressively against me, it was important to have that exist. There weren’t any depictions of strong gay men in media and Buffy served as a surrogate for that.

Ok to be honest I sometimes I feel a bit corny citing this work, but it’s true. It really was so important to me.

No way! It is no different than citing a great Tennessee Williams play. It’s all about the human struggle. This one is just in a different disguise. It has a knowledge of what it is, then goes smarter than what it is.
You’re right. It has a self awareness that allows the writers to circle back and explore some real stuff.

How do books play a role in your work? What are you reading?
Books act as another way to enrich and expand my universe. I just finished Mark Fisher’s The Weird and The Eerie and reread my middle school copy of Wuthering Heights. Now, I’m beginning Tales of Love by Julia Kristeva.

There is something about beautiful women in peril. Is there something in there that you identify with?
Yes. I can certainly identify with the peril. The beauty part might be aspirational. Good horror movies have a way of reflecting societal anxieties in the form of whatever monster/disaster is present. There’s something very satisfying about having those fears and anxieties take a concentrated physical form.

Why is your work in watercolor?
I like the transparent ethereal quality and that its so unforgiving. You have to be very deliberate with your marks. There’s also something queer about painting portraits in watercolor.

What’s next for you?
I’m making larger scale works and painting from images I’ve made myself.

Besides being beautiful and great actresses, what do you like about the women you paint?
With most of the women I paint, there’s a sense of defiance about them, this real desire to survive in spite of a, b and c. 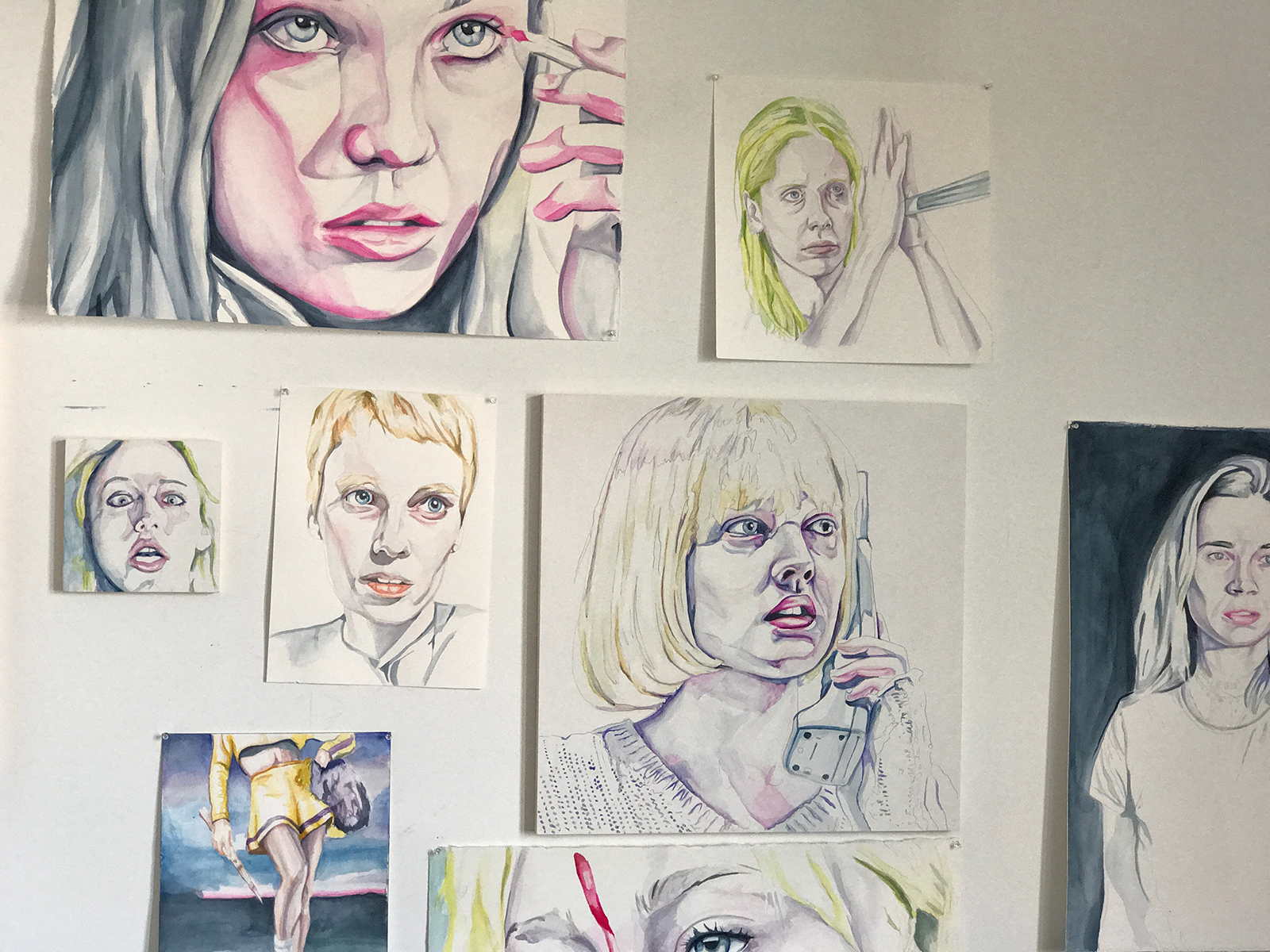 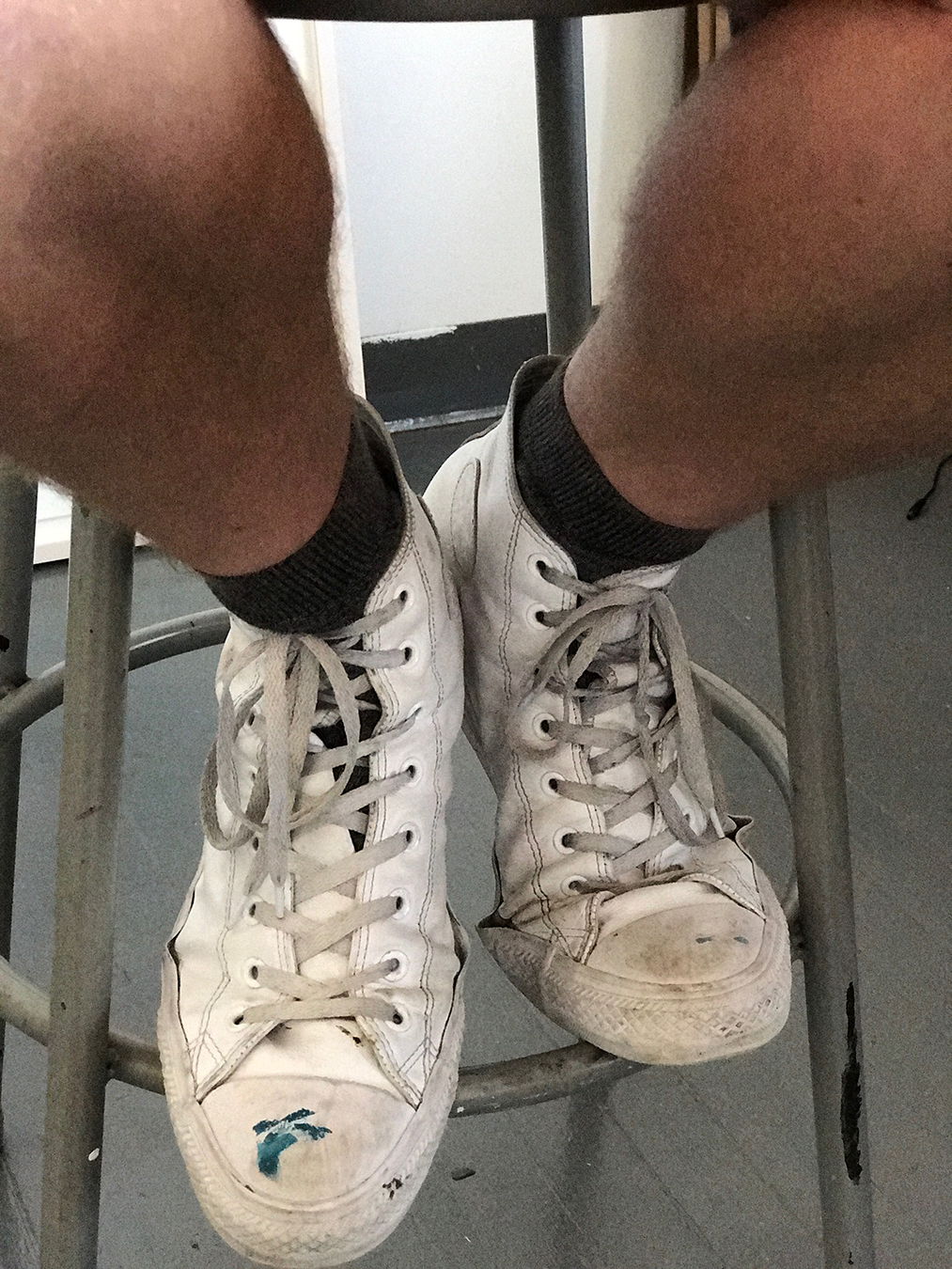 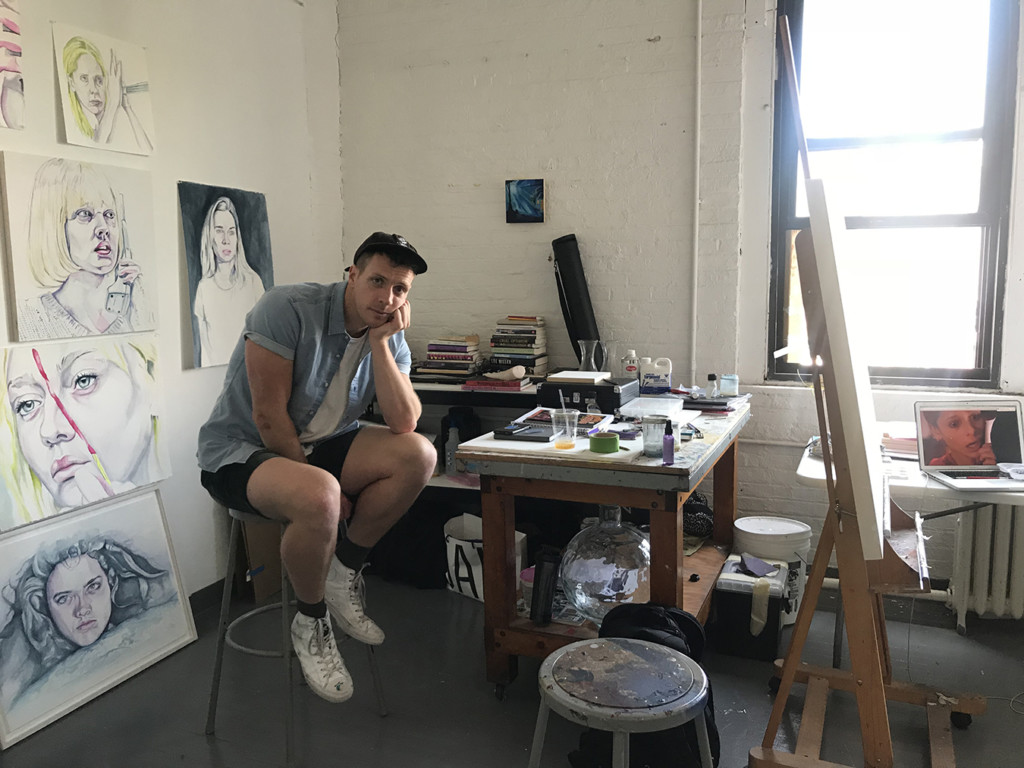 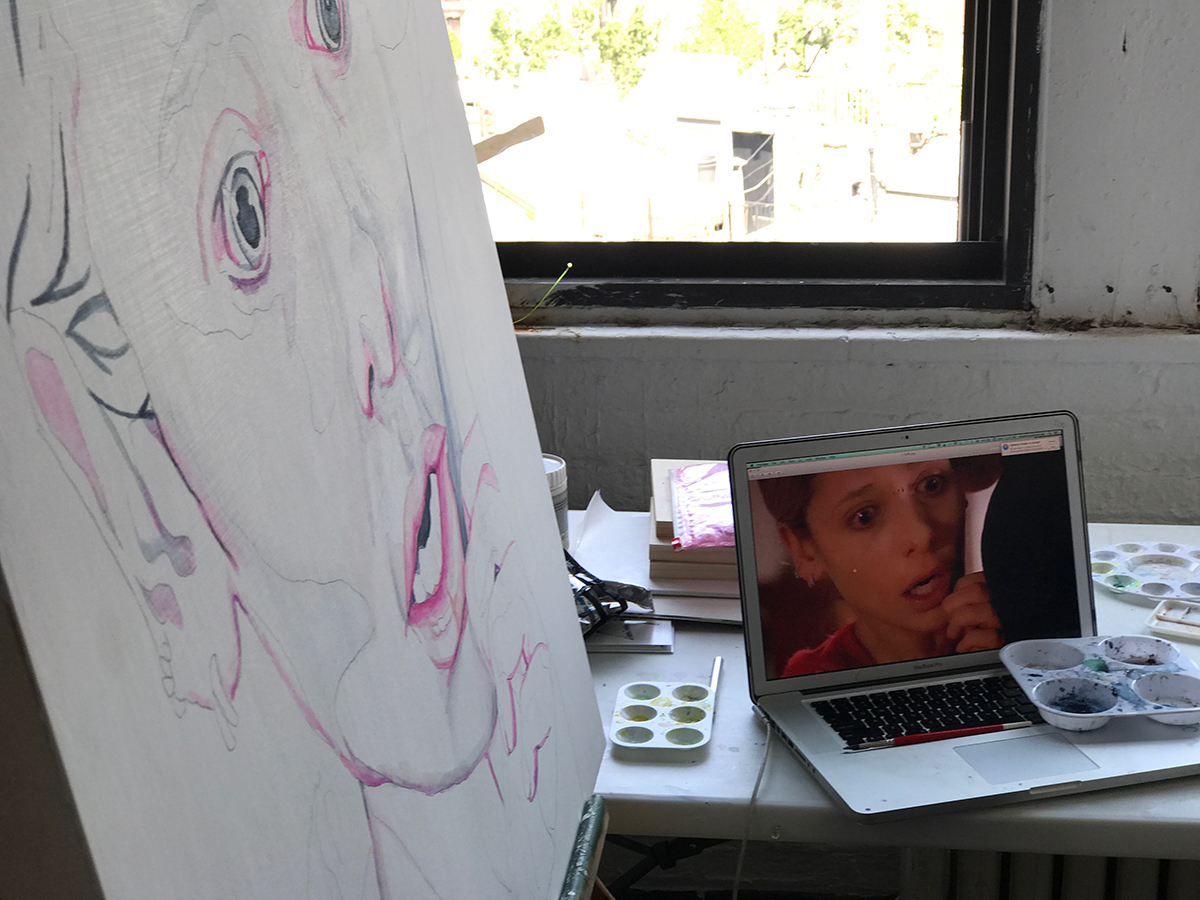