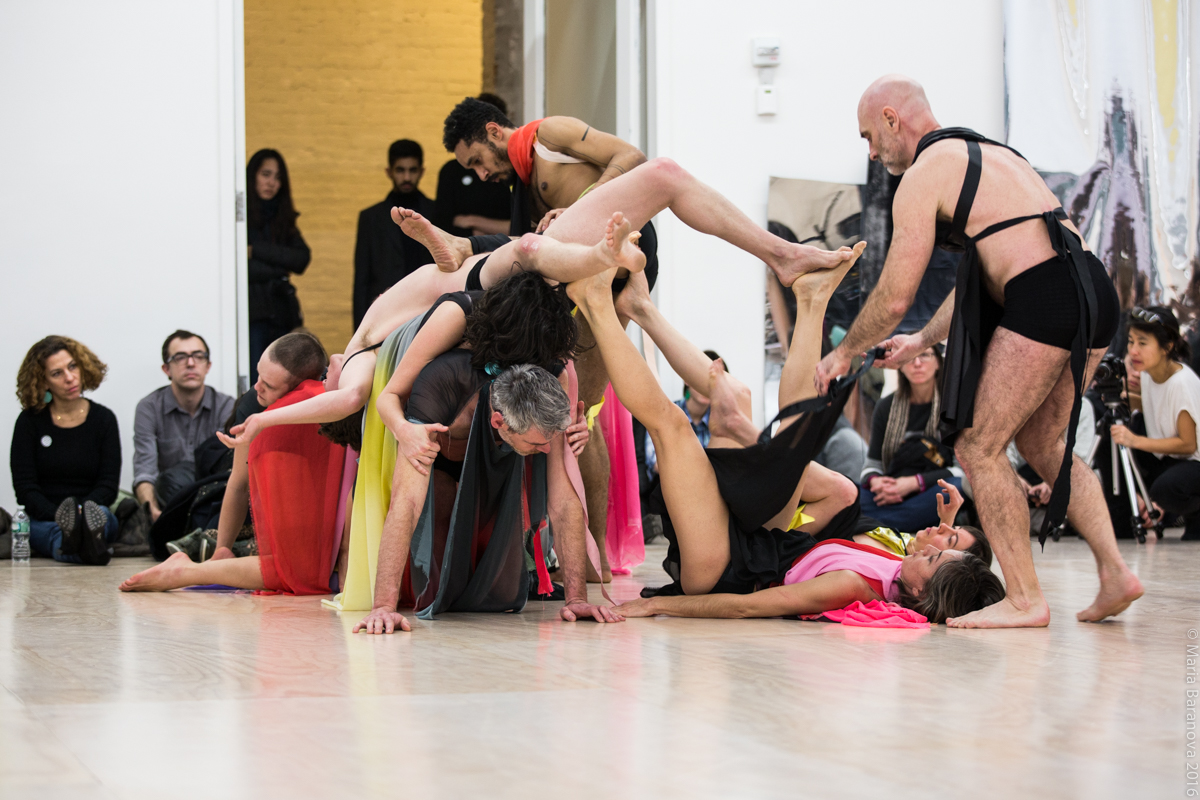 “I make worlds composed of elements of my own obsessions. The work itself becomes a platform for examining these fixations,” announces Walter Dundervill, the celebrated artist and choreographer whose multidisciplinary practice rebels against definitions and genres—and against time. His three-hour-long tour-de-force Arena – in which he orchestrates an exuberantly fluent, living tableau of European allure and extravagance – has been performed at various prestigious venues around, including MoMA PS1 in conjunction with Greater New York. We tête-à-tête’d with Dundervill to discuss his obsessions, their influence on his body of work, and everything in between.

In a previous statement, you mention how you create worlds composed of your own obsessions. What are your most common obsessions?

That was an early statement that I don’t think about very much now; however, it is still true about my work. Arena is the accumulation of work I made over the last 8-9 years, in which costumes and sets are reconfigured with new physical objects. My main obsession that has come up every time I perform it is the French Revolution. I look at forms and shapes to translate the texture of an era. I am interested in how politics are created through clothing, and antiquity and Classicism were main inspirations during that era—similar to what the French Revolution is now in my work. I am basically interested in that soft transition between periods. Obsession is history, and I am layering one after another in nonlinear way.

Objects, most commonly fabrics, have significant role in your work. How do you see the connection between obsession and possession?

There is an obsession in accumulating materials over and over, and in having it all. One way to maintain is to let it transform. My interest is in materiality rather than materialism, in things you can get your hands on. Stylization of materiality attributes to luxury which I am not really interested in. I focus on the presence of an image that people can recognize and relate to in different ways. Later comes the deconstruction of such relativity. Ideas and politics are interpretive and we interpret them and think about them differently.

Transformation is another element in Arena. Why are you so interested in flux?

This interest comes from nature and my connection to it. Even though there is not an explicit reference to nature, an organic process is undeniable in my work. It may be considerably less apparent, but the dancers and I are adopting a practice in which we embody the molecular structure of a mushroom. My fascination for mushrooms started when I came across various kinds in Florence. Mushroom colonies can grow to enormous proportions and spread out for miles and still be considered a single organism. After I researched mushrooms, I figured I am on the right track. I make work instinctively and things come out of that process. Thus, in Arena, dancers perform as a single organism and they have a neural network.

You are very precise and controlling during Arena. How pre-planned is the whole performance?

The structure in terms of sequences of dance is set, but how dancers operate is spontaneous. It is a combination of a chaotic mess and a completely obsessive compulsion. Things looking messed up is something I am fine with, yet I am precise about how messed up they look. The process and tasks I am trying to accomplish through this process become the content of the work. I avoid turning the conversation between the performers and I into a power play—they have autonomy. We collectively realized it is very much about them possessing their own free will. There exists a relationship between submitting and resistance, and I am aware that I have to submit at a certain level as well.

How do you see the fine line between obsessiveness and perfectionism? Are you a perfectionist?

In my own way, yes, but I don’t need things look pristine.

Do you dress or undress people in your head?

Not so much. For the most part, I don’t care. If someone wants to make a statement through clothing, I find that interesting.

With regard to my own obsessions, how was working with David Wojnarowicz?

In 1989, when I first came to New York, Gloria McLean was working with David on ITSOFOMO at the Kitchen. I visited him in his studio during this time, and he was wearing a T-shirt that said “Fuck Me Safe” on it. He had TV monitors showcasing his videos, and he would deliver monologues at the same time. We inhabited the landscape of his performances. He had the mechanism to deliver what he had to say. He was a virtuoso and I think that’s why he resonates with people.

You also DJ in Arena. How do you imagine the relationship between music, performance, and fashion?

I use this program called Audacity, in which I combine edited, found music, recorded sound, and some of my writings. The score starts with recognizable tunes, and slowly distorts as it progresses. The performance actually starts only after the tunes I created start to play—or at least in my mind. The part before that is palette cleanser.

Do you see connection between obsession and durational performance?

In my opinion, performance has to go on for a good amount of time in order to have audience really experience the same transformation and historical time. There is a different sense for those who watch the entire performance in terms of witnessing how it shifts and transforms. Certain sections are the same in each performance, although most parts are unique. There is a pool of costumes, objects, and actions that I pull from, and the way dancers operate is different each time. I felt from the beginning that I wanted the audience to have the agency to leave or change the space. The MoMA PS1 performance, for example, offered all these ways of seeing and being seen. Witnessing history taking place and tuning in for its chapters should happen organically.

All photographs by Maria Baranova-Suzuki 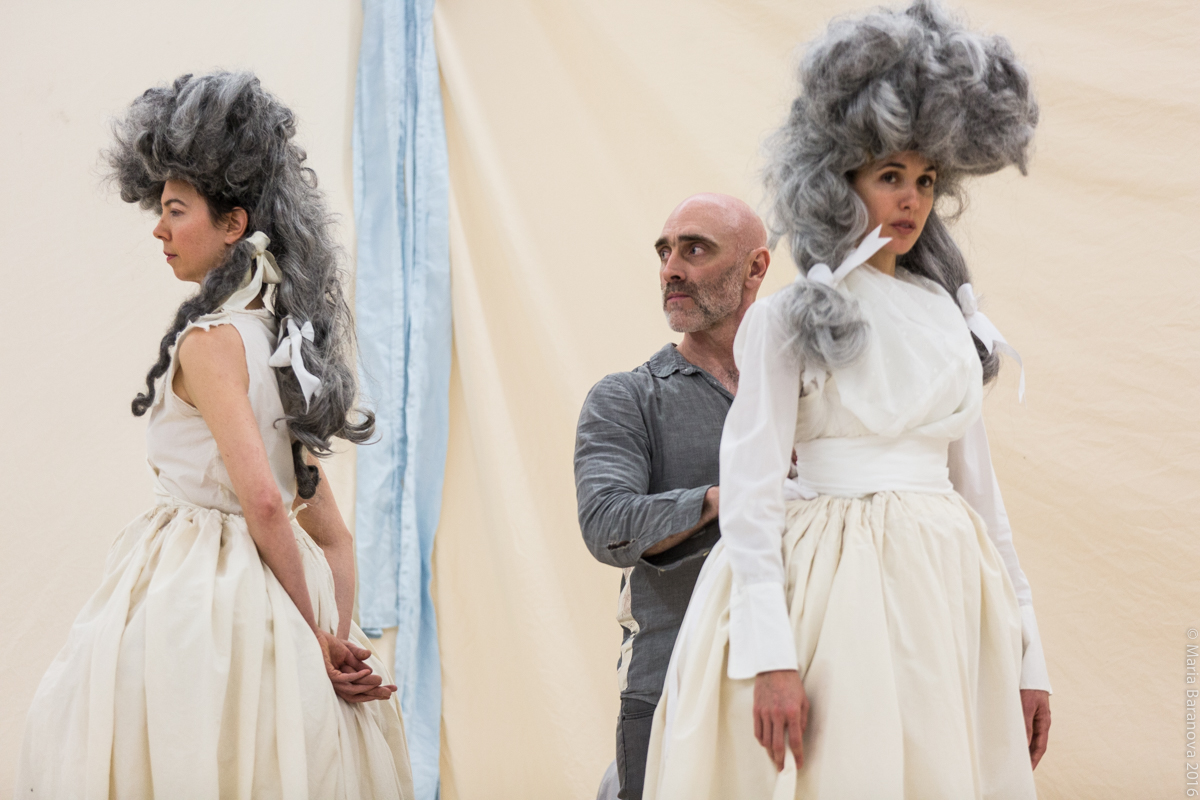 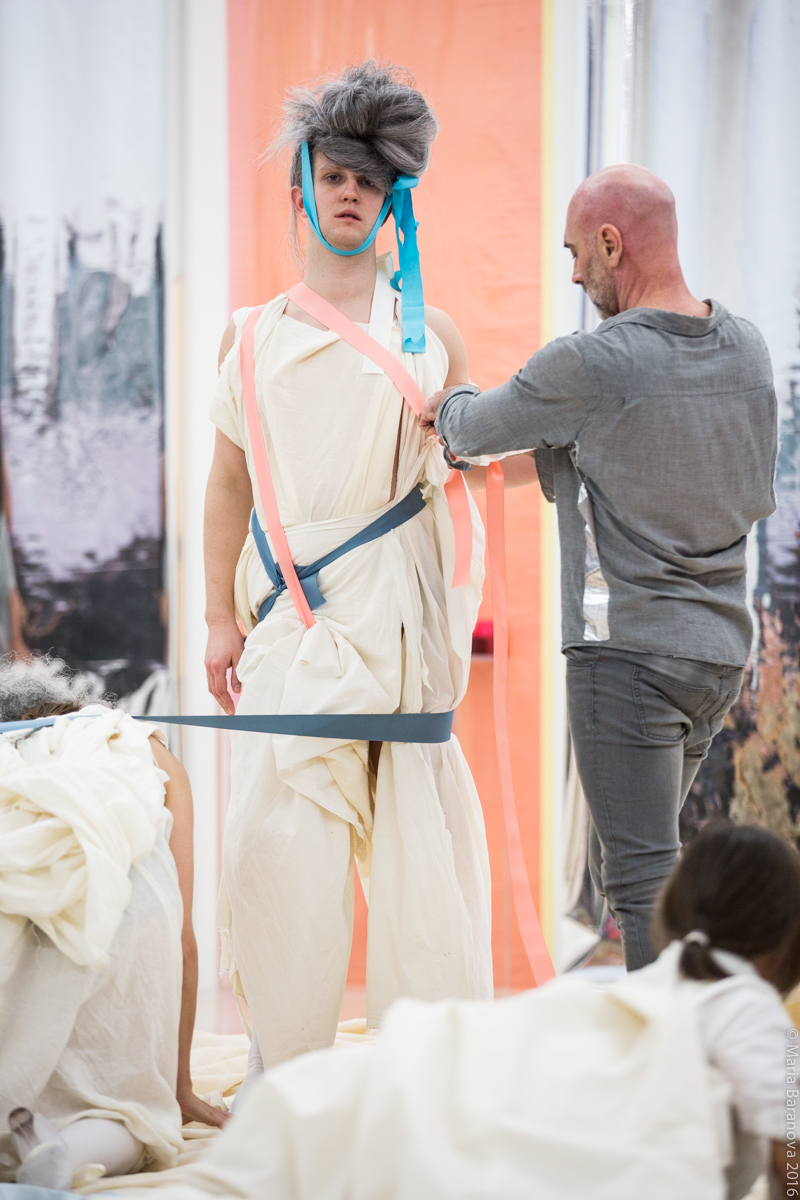 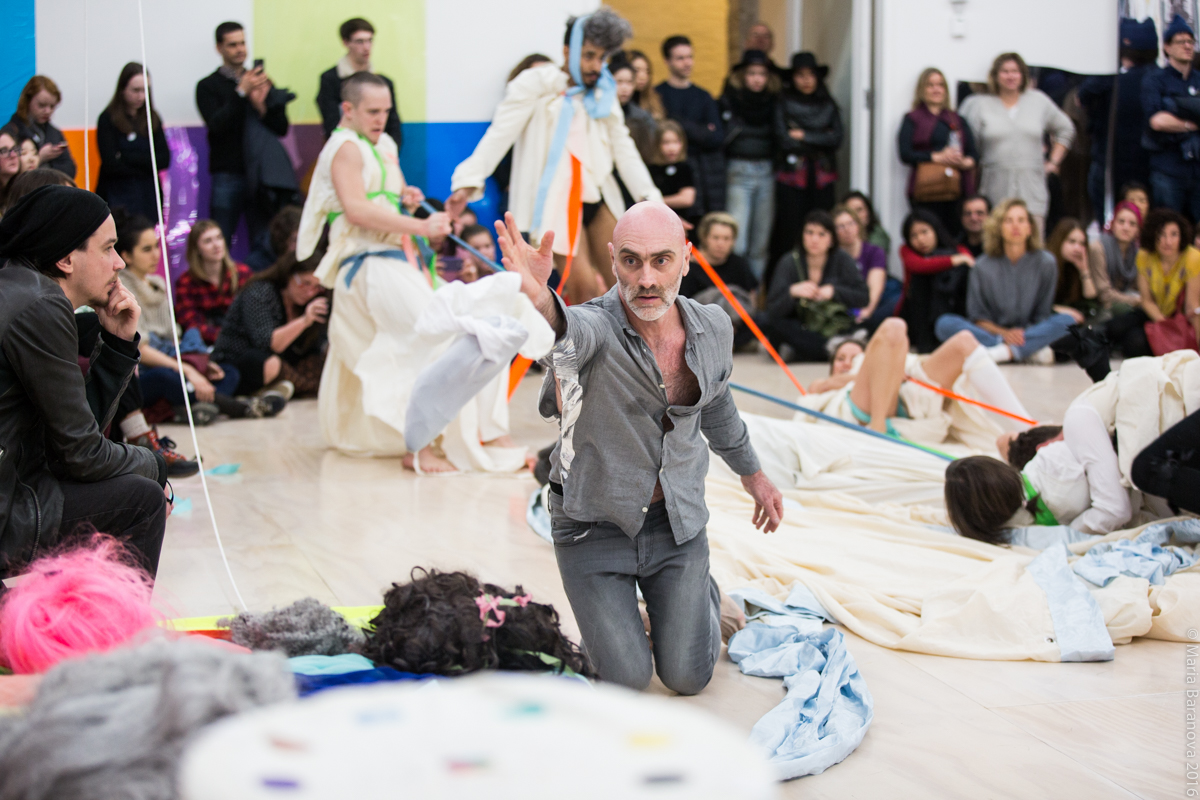 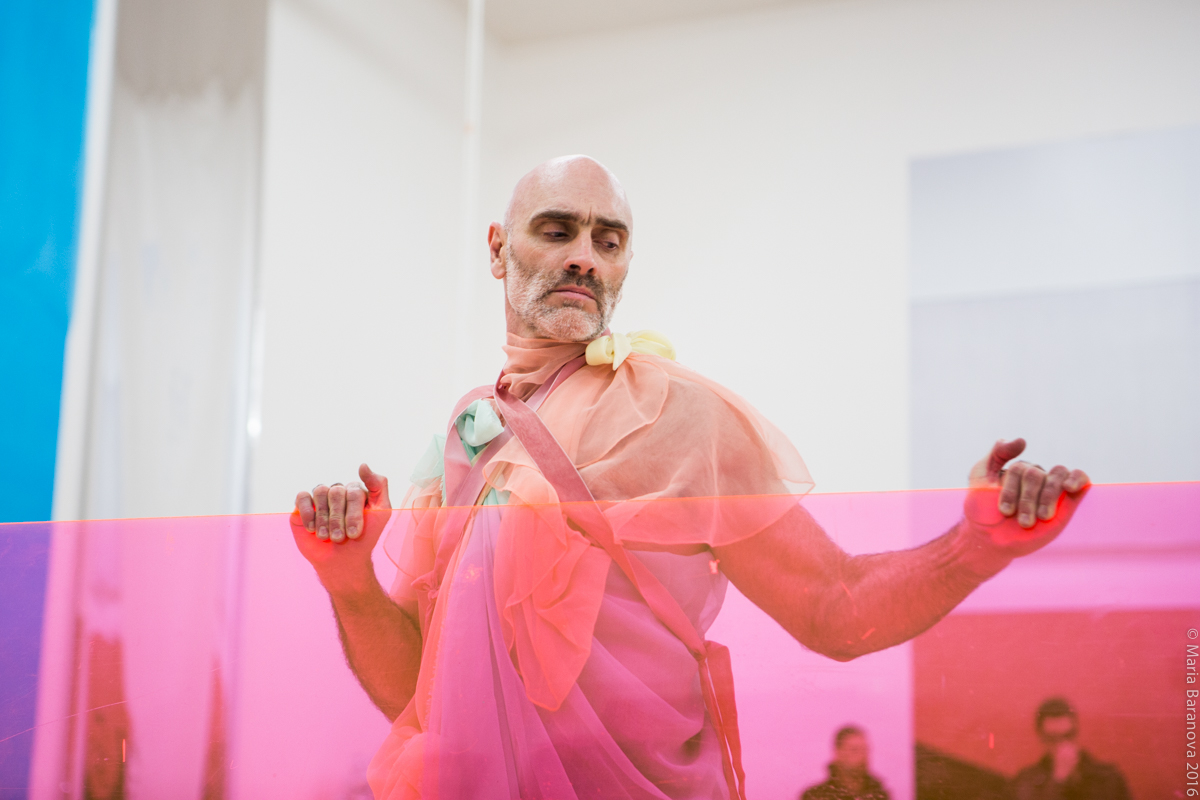 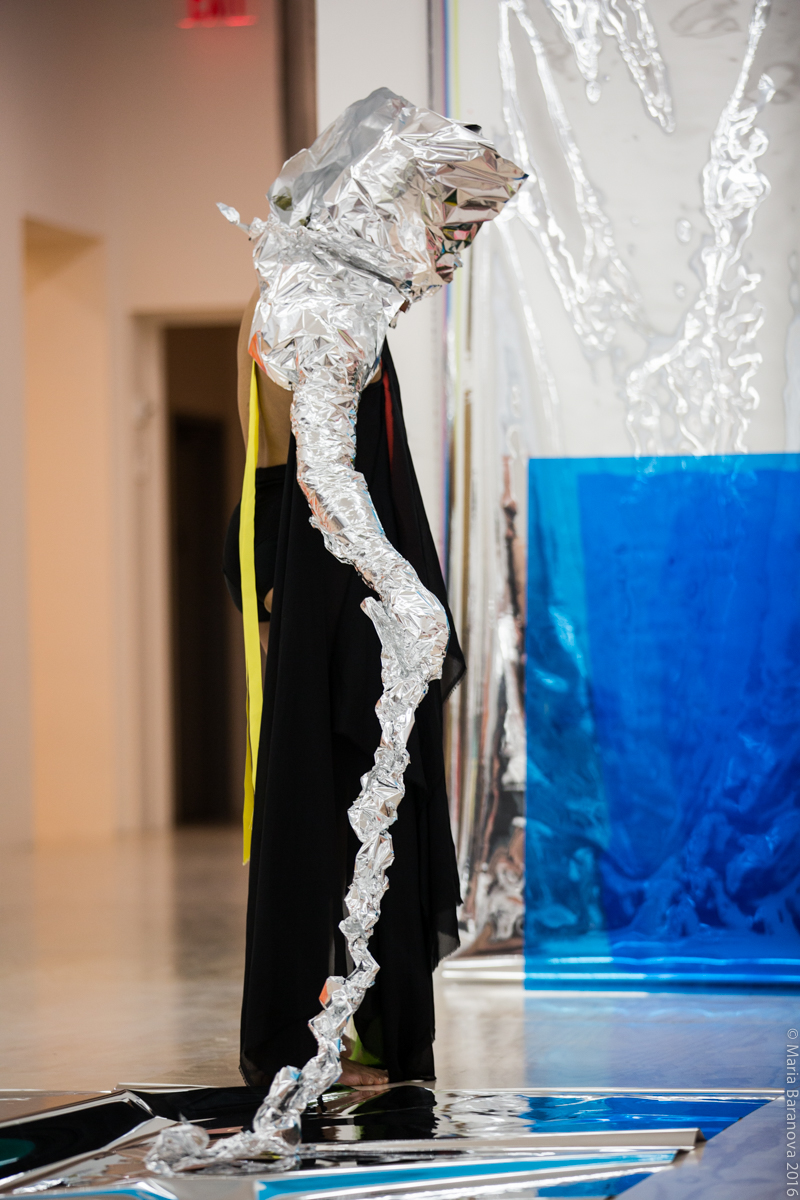 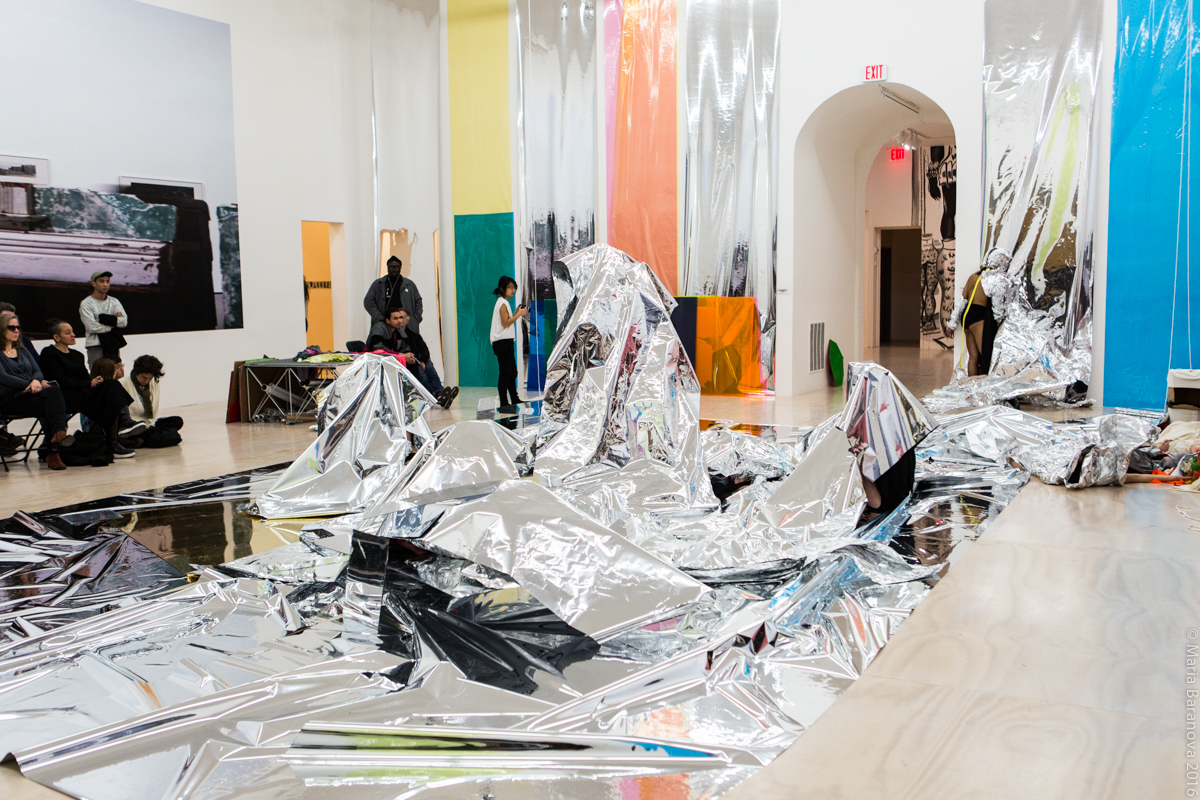