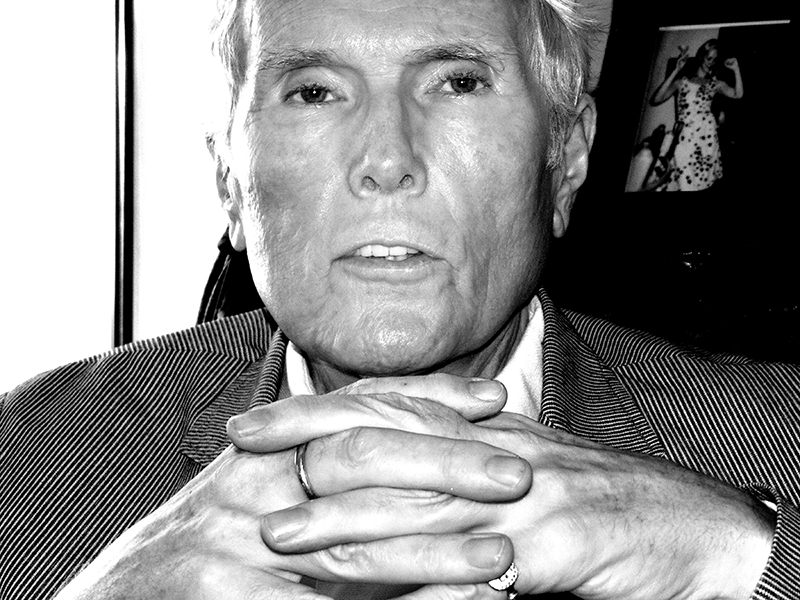 photography and interview by Khary Simon

You smell really good. What cologne is that?
I might have a little left over from this morning. It’s Melograno from from Santa Maria Novella, made in Florence from pomegranates by nuns.

It’s nice. What does “work” mean to you?
Well, it’s about creative stuff. Making things. For me it’s about entertaining myself. Work, Art, they both mean art and work.

Does that actually feel like work?
I like to work. That’s what I do. It’s what I do for fun.

Is work ever unpleasant?
I try to avoid unpleasant situations. There are people who I won’t work with. That’s why I am a writer. I like to put words together and entertain myself.

Did you ever have a job that others would be surprised by?
I was produce manager at a grocery store. I worked at Republic Steel on a blast furnace. I did demolition of houses that burned in the riots in Washington. I was a temporary typist. That’s one good thing about being a writer: If you’re a good typist you can hire yourself out for the day.

When I was younger, I once worked at a fast food restaurant for the summer. I found that experience oddly rewarding because of the strict rules and the easy ability to know when I did a “good job.” Now that I work in the arts, at times it can be difficult to know when one does a “good job.”
Do you find that in your work?
I always try to do a good job. It’s like winning a game.

But how did you know when a job was done?
Well that’s the thing with art and writing. It’s hard to say when it’s done. You just know. If you don’t you have to take a break. Or put the ending first and the beginning at the end. Or you make yourself laugh or have a serendipitous eureka of happiness.

Has anyone ever asked you to take a piece further but you thought it was complete?
Sometimes I get asked that, but mostly in publishing less, it’s more for the publishers and editors. I find that mostly editors want it shorter. It’s not often that I’m asked to make it longer. I used to write 6,000 to 10,000 words. Now they want 700 words. Very rarely am I asked to write a longer piece and that’s when the art director is running the magazine. For some people writing is wallpaper. you get paid by the square inch.  Now they tall you what they pay, as if it were a commie operation.  Most people don’t really like to read but they want to seem smart, so editors try to get something short and inexpensive from someone people have heard about, something that they can talk about with their friends about and seem well informed. I find It’s usually good to let [a written piece] sit for a day or two. Then I come back to it in a few days with some extra insight. Sleeping on something is a real thing, a literal thing.  I often finish it in my sleep.

Do you think your self-presentation helps your career? I’m interested in how one’s wardrobe affects those around them. For example, when we look at who we trust flying a plane, doing our taxes, etc. – how much do we need the clothes to inform our trust level? You are known as a well-dressed man and you are also a well respected writer within art, fashion,and culture. Do you think that your presentation of self gives you a sense of authority to do your work?
Oh yes I think so. I have my own sort of uniform. I would not want to be the guy who wears a suit everyday. I’d hate to mistaken for a congressman.  I like to look freelance. Maybe bohemian, but also a bit plain.

What about work keeps you going? On accomplishments alone, you could have stopped many years ago and rested on those cultural milestones, but you didn’t. You seem very open for more.
Work entertains me.  It keeps me engaged.  I’m continuing my education.  I always like something new. I’ve done music. I had a band. I acted in movies. Written screenplays. Directed.

In a world where so many people are not interested in hearing new ideas, you seem very open to people and creativity. Why is that?
I truly can’t imagine the alternative.  People that are very sure scare me.  You can’t trust them.  The clergy, some teachers, lawyers…when people are closed off to learning, they are dangerous.

What are you doing for work right now?
I’m doing a talk show Tea at the Beatrice with Glenn O’Brien.  It’s a conversation show on M2M, the new network from William Morris Endeavor.  I’ve had guests like Richard Prince, Tom Sachs, the Safdie Brothers, Naomi Campbell and Edward Enninful, Proenza Schouler, Olivier Zahm, Inez van Lamsweerde, Gisele Bundchen, Pat and Anna Cleveland, Shepard Fairey, Chris Blackwell, Leandra Medine,  Jerry Saltz, Hailey Gates.  I’m finishing a book about art and the art world that explains everything.  I’m writing an advice column like the GQ Style Guy that I did forever, but for Maxim. It’s called Ask Maximus, illustrated by Jean Philippe Delhomme. I’m also Max’s “ editor at large” which alloKS me to employ my editorial chops, write without a stress, borrow a Rolls Royce if I need one. I’m also having a kind of retrospective moment, making compilations of my past work. I have had a lot of writing that consisted of essays in magazines, and after a month these just disappear,  but I think this work is still worth reading for fun and profit. The older work still has value, nimble turns of phrase, yuks, etc. It’s aged in French oak.  I’m mining the archives and I’m finishing up a book about art and the world and the art world. I just published a play that I wrote with a friend in 1986.  I’ve just done a little poetry book.  I’m trying to break into motion pictures.

When re-reading that play or older reviews, what do you see that has changed?
I think in certain jobs, you should get better. You learn everything about the work, the more you do. Athletes become better coaches as time goes on. painters should paint better, writers write better. I think I’m better than I was two years ago. I say that, but when I look at something I wrote 2 years ago, I think it was pretty good.

What would you tell your 18-year-old self?
I’d say you can get anyone you want.   And don’t be afraid to speak up.

Was that a problem for you?
No. I might have been better off being a little more outspoken, but since I tend to think I’m right, maybe quiet was good for a while.  Now I am very talkative, but there was a time when I would just  listen. Unless I had a really good line.  I was always around very important people so I didn’t talk a lot. I was very confident but it was a kind of reluctant megalomania.

What part of town did you live in before moving downtown?
I’ve been in this apartment for 16 years. Prior to that I lived in midtown east.

Where?
East 58th street. I never did anything in that neighborhood but I found a great apartment. It used to be Tennessee Williams’s apartment.

That’s very poetic. Did you ever find anything in there?
No, but it was decorated in a very North African style.

I always fantasize about living in an apartment and finding an old letter hidden somewhere in the floorboards. Did you ever do any graffiti during the 80s?
No.

Wow, I would imagine you would have tried it because so many of your friends were close to that world.
No. They didn’t do what I was doing either. Did you ever see the film Wild Style?

Yes.
I played a museum director. In the film, Freddie (Fab 5 Freddie) says, “I want to tell you about a new art movement called graffiti”  my character replies, “Im familiar with it. We spent $50,000 removing it last year.”

Social media can be interesting for writers. I heard a famous comedy writer say that she does not write anything on social media because she does not make money on it. She actually gets paid for jokes and social media gives it away for free.
Well, I want do a book of all my Twitter posts. I already did a small one as a project with Purple. It was the artist book that came with the last issue. Now I want to make a big book out of it. I tweet a lot, but this time I’m going to get paid for it. My mother used to say, “Why don’t you write me letters?” I’d reply, “Well you don’t pay me.”

Why do you keep so many keys?
I have keys to other lofts in the building. Old apartments, old offices, mailboxes.  I wrote a poem about a jar of keys.  In this jar is a key to the Factory. I don’t remember which key it is. I don’t remember what any of these keys are. But one of them is a key to the Factory. No Purple Heart, no Medal of Honor, just a mason jar full of keys that used to work. There is no more Factory But in here somewhere is the key.

See more on Glenn, and the other men we are featuring in issue, “Men At Work”, here 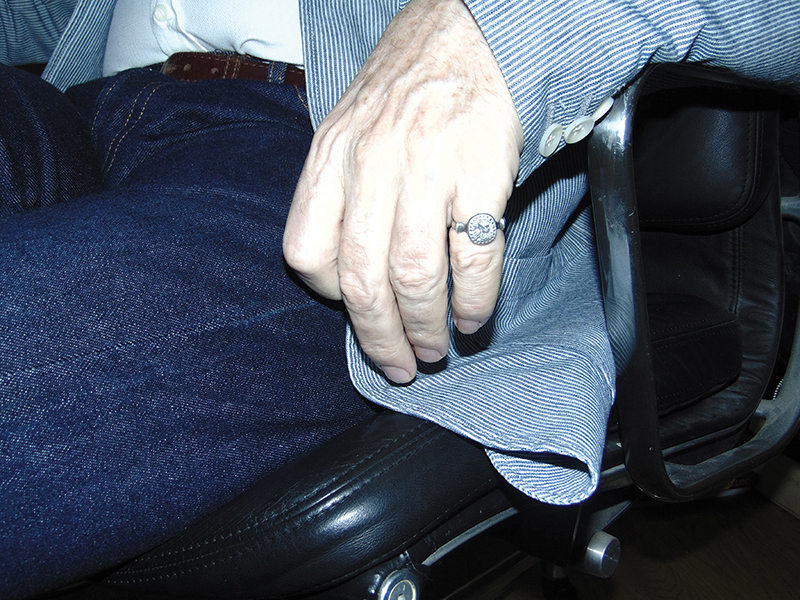