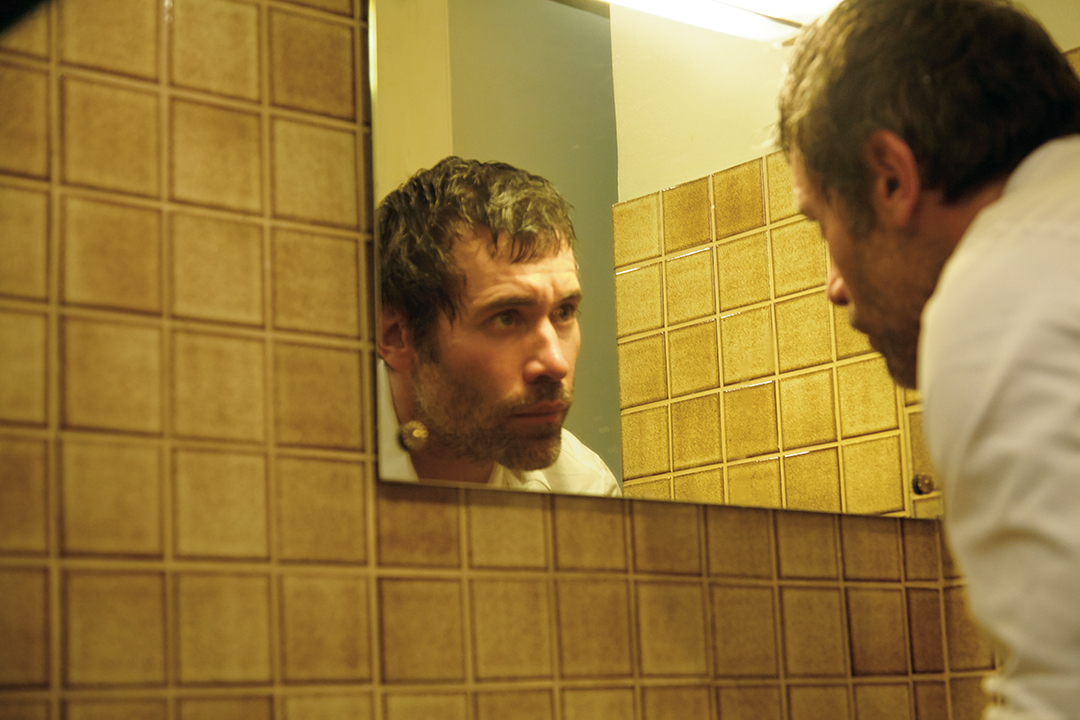 Photography by Nicolas Wagner. Styling by Story and Misericordia. Shirt by Dior Homme. Image seen in the issue “Are You There Alone”

I know that your father was in the film industry and you grew up around it. What did you think of his world when you were younger? Was it something you knew you wanted to do yourself?

Actually, no. I didn’t want to be in film because I grew up with an actor as a reference, and I knew how difficult that job was. You know it’s hard to live that life. Also, my father was a theater actor and I like theater as an audience member, but I really didn’t want to do that myself. I always had a big, big crush on cinema. When I was seventeen, he had an audition for a short movie and the storyline was about a father and his seventeen-year-old son and my father just told the director, “I know what you’re talking about because I have a seventeen year old son – I know all about these kinds of problems.” The director basically said, “This could be great. If you like he can come with you to the audition.” I was on vacation and I said yeah why not. I loved cinema and I wanted to see how a movie got made behind the scenes. So we did the short movie and it had great success in festivals and everything.

So you mentioned that you had a crush on cinema. Were there any directors, actors, or movies that were particularly important to you growing up?

Of course I was very touched by the new Hollywood and all those directors from the 70’s in the States like Scorsese, Coppola – all the directors from the 70’s. I grew up watching The Godfather. I was also very touched by the amazing cinema from Italy just after the war, such as Pasolini, Antonioni, Visconti, and Fellini, as well as some of the La Nouvelle Vague filmmakers like Louis Malle and Truffaut. Basically all those big stories with great characters, great actors, and great scripts.

So would you say on some level you knew you were more interested in being a director rather than an actor?

At the very beginning, even if I did a few short movies, I didn’t expect that I would become a professional actor. I wanted to study law to become a lawyer. For me it was a big joke; I was smoking blunts on the set, and I was just like “OK this is kind of easy. If I can make money doing this, that’s cool. People think I’m a great actor? Yeah let’s go.” But after a few years I realized that it was a real job and that it was super hard with lots of complications. Maybe I was a bit under pressure with the success and everything but I realized I didn’t want to be just an actor. That alone was boring for me. I didn’t want to be in theater and learn Shakespeare either because I loved cinema. Plus I really need to have a goal, to have something to fight for. I didn’t know I wanted to be a director, but I had the time and I wanted to tell stories and shoot movies with my friends. I didn’t know it would become so important to my life. The circumstances made it more and more clear that this was what I was going to do. I just went in the general direction and listened to my instincts.

With Yves Saint Laurent, what was it like to try to portray the most intimate details of someone else’s life?

When I met Pierre Bergé, we had lunch and of course we talked about Yves Saint Laurent and how I wanted to make a movie about his life and their love story. But we also talked about the fact that none of us – Pierre Bergé, Yves Saint Laurent, and I – grew up in rich families. What fascinated me was the fact that Yves was someone who fought for his dreams all his life and, even if he burnt himself doing it, he did it. He gave meaning to his life. I told Pierre, that’s exactly what I’m trying to do with my own life as an artist. One of my favorite books when I was a teenager was Martin Eden by Jack London. Basically the entire lunch turned into a discussion of Martin Eden. It was a beautiful moment because Pierre is what he is and I am what I am and we met each other as human beings and we trusted each other to go on this adventure. I was talking about [Pierre and Yves] with subjectivity. It’s not a documentary. It’s my own interpretation of their story, Pierre he had to trust me completely as an artist. At the end of the lunch, he told me he understood why I was interested in making the film and said, “Yeah, you will have my support and my help, you are free to do the movie that you want.” That was amazing. I thank him every day for that.

Music seems to play an important role in your films.

I listen to a lot of music. I also listen to music on the set. I have two earphones, one small one with music and one big one with the sound on the set. So, in a way, I already have a soundtrack forming in my mind while we shoot. I love music in films as an audience member, so it’s a pleasure for me to use good music and a good score. It brings some magical and emotional things to the movie.

On Versailles I worked with Eduardo Noya Schreus, who lives in Montreal and makes electro music. He’s amazing. I put pure electro music on a period drama because I really wanted to create something with a new flavor. On my new film, I’m working with an American band called Winged Victory and probably a French electro group called The Shoes. They’re amazing.

You’re all about nostalgia…

Favorite song that you’re embarrassed to admit you like:

I’m embarrassed of nothing! I love the latest Rihanna album. But I’m not embarrassed.

If there was one feeling you could capture perfectly on film what would it be?

It’s not super original but I would say love, of course. Love in a large sense – it could be brotherhood or friendship. I’m interested in that feeling that makes our life possible and makes it make sense. It’s kind of magic. I think that we absolutely need the other. I think that unfortunately it’s difficult for me at the moment to make stories that don’t talk about that. Maybe one day.

How would you say love plays into the new film?

Cynthia Talmadge is an artist living and working in New York.
@cynthia_talmadge