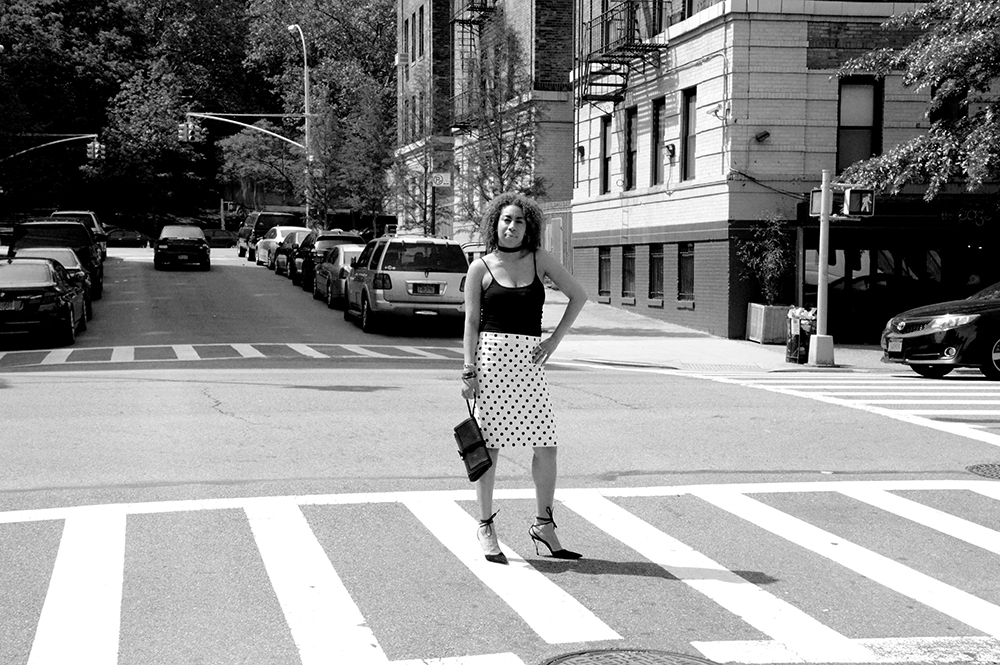 What was your first art crush?

It would have to be Mickalene Thomas. She is an artist I didn’t learn about in college in the early 2000s, I was taught about dead white men and women, not young Black women artists. I think the first time I saw her work was either at PS1 or the Brooklyn Museum in the late 2000s. I was hooked from the minute I saw how she depicted Black women as sexy, glam, and powerful. Her artwork invented the term Black Girl Magic before it came into existence.

Who is your art crush now?

The iconic and legendary Lorraine O’Grady routinely comes to mind. I feel like I physically resemble her when she was younger. Today at 83, she wear chokers, large hoop earrings, black leather jackets, tights and cowboys boots. Lorraine is this badass feminist artist who in her mid 30s, after many careers as a rock critic, US government intelligence analyst, and a literary translator became a conceptual and performance artist. In the early ‘80s, she created this fictional persona “MLLE Bourgeoise Noire” who would disrupt art world events in downtown Manhattan. She wore a cape and gown constructed of 360 gloves from thrift shops (180 were white gloves), and would recite poems aimed at democratizing and calling out the mostly white art world of the time. So doesn’t this sound familiar? because here we are still, 35 years later. This work of hers is currently on view at the Brooklyn Museum in the ‘We Wanted a Revolution: Black Radical Women 1965-85’ exhibit.

What do you see as the future?

Tolerance. Just complete tolerance. I just hope we reach this place of openness and respect for all communities. America will only continue to become more black, brown, Latinx, Muslim, and LGBTQ, so let’s just accept it.

Is there a post-Trump reaction to art, and what is it?

I think the rise of Trump pushed the narrative for intersectional feminism  even further. I think we all realized that we’re all in this shit together as women, and banding together and fighting harder is how we’ll overcome these white male patriarchal roadblocks. Art workers, culture-makers, writers, artists, thinkers, and celebrities know this. This is constantly present in museum/gallery exhibitions we see and speaker panels we attend.

Imagine walking through one of your favorite shows. Who is it and what ideal music would play on a playlist?

One of my favorite exhibits of all time was the ‘Black Style Now’ exhibit at the Museum of the City of New York (a stellar institution BTW), back in 2007. It was all about hip-hop style in New York City, so lots of bling, gold chains, furs, streetwear brands, and denim. There were pieces on display by Baby Phat, Phat Farm, Sean John, and looks worn by Beyonce from various concerts/appearances. I would would love to walk through this again with music from: Lemonade, A Seat at the Table, DAMN., More Life, Rihanna’s Anti, Starboy, 24K Magic, Awaken My Love, Lion Babe, Miguel, Ibeyi, Santigold, Chromeo, Grace Jones, Fela Kuti, Hector Lavoe, and La Lupe.

I have a few articles coming out later this summer, one about a female-operated art space in Bed-Stuy, Brooklyn and an interview with a filmmaker about a trans icon from the Warhol Factory days. Also in early June, I’ll be a speaker on a panel about art criticism and feminism and pushing intersectional feminism front and center within these art conversations.