FJM & FM:
Who’s your Super Bowl favorite?
JB:
San Francisco 49rs have to be the pick for me. Though, I think if they
meet the Ravens there – it will be an awesome game!

FJM & FM:
Do you play Fantasy? Have you ever won a season?
JB:
This is my third season of Fantasy Football, and hopefully, I can get
first or second this year. Finished third my first two years. 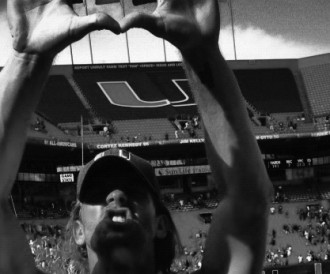 FJM & FM:
What is the trait the best players of the 21st century need to possess?
JB:
I’d say all these guys have to have a strong work ethic, always
striving to be better and pushing to get their personal best. But they
have to have pretty thick skin. Every New York sports fan has to see
what an impact the media and constant attention can have on athletes’
performance. There’s been plenty of stars from other markets whom
didn’t do the same things in NYC.

FJM & FM:
Who is your biggest football influence no one would expect or you keep hidden?
JB:
I’d have to say John Offerdahl. When I was around 13, my dad got
really sick and was hospitalized for Thanksgiving and almost through
Christmas. J.O. found out through some of my dad’s friends, and he got
a bunch of the Dolphin players to autograph some things for me and
sent me a watch. Def made my month – and then some!

FJM & FM:
What is your earliest childhood football memory?
JB:
Ha-ha! When I was four-ish, I’d tell people I watched my dad’s “’Ami
Dolphins.” Loved watching them play on Sundays, but I obviously hadn’t
grasped the city name. I just always heard him say, “Miami,” and
thought he meant his “’Ami Dolphins.”

FJM & FM:
What was your most spiritual experience playing football?
JB:
My most spiritual football moment. Hmmmm, it’d have to be a big upset
my high school team had against the number one team in our Florida
class. The defense played together and defied the odds and everything
we had heard all week leading up to it. Amazing what can happen when
everyone gives themselves totally to a purpose.

FJM & FM:
What makes the high school football scene in Florida so competitive?
Was 7 on 7’s as popular when you were playing? Did you consider
playing in college?
JB:
Florida football is amazing. There’s tons of speed on every field.
Maybe it’s just because we can play year-round in summer-like
conditions, but whatever it is it’s undeniable. My first 7 on 7
experience was just after high school playing in flag leagues – was
def a blast! As for college, I would’ve loved to have played. But it
didn’t seem to be my path. Everything from my final high school grades
to where I was gonna have to go to make it happen – just didn’t work
out.

FJM & FM:
Which position do you feel the most kinship with: quarterback, wide
receiver, linebacker?
JB:
I started high school playing quarterback and safety. Safety is def my
favorite position on the field – love that field general aspect, like
a QB, but getting to hit people instead of getting hit! My junior and
senior years, I played middle linebacker, which I loved as well, but I
was definitely walking around a lot heavier than I am now.

FJM & FM:
Is your model-ready body the same as your football-ready body? Were
you ever encouraged to lose some bulk?
JB:
When I started modeling, I was def encouraged to lean up and stay in
as good of lean shape as possible. The bulk and building have taken a
back seat for good, for me. And I honestly feel better and more
energetic walking around the size I am now.

FJM & FM:
Which diva wide receiver will you miss the most: Terrell Owens or Chad
Johnson? Which would you prefer to have in your locker room?
JB:
Ha-ha, being a Fins fan, I was really hoping Chad would help us out
this year. He may be a handful, but he is still open. Oh, well. I’ll
miss watching both of them.

FJM & FM:
Andrew Luck or RGIII: Who has the better rookie season? Career?
JB:
Andrew Luck I’m sure will have a great career. Buuuut, I have no idea
how any team could pass up an opportunity to have RGIII running their
offense. He has the potential to change or take over a game in
spectacular ways. Dude’s a beast! If he stays healthy, he can surpass
what Vick, Randall Cunningham, Donovan McNabb, and any other athlete,
QB has done before. I’d build a franchise around him in a heartbeat.
It’ll be amazing watching him and Cam Newton over the next few years –
they may change the NFL for good.

FJM & FM:
Does Tebow have a chance at usurping Sanchez as a starter for the Jets?
JB:
This one’s hard for me. I am so biased a fan with the Jets being our
division rival, I could care less which is playing most of the time,
as long as they’re not beating my team. But I must say with everything
Tebow has been ridiculed for, he’s kinda won me over – the guy’s a
winner and he doesn’t seem to be breakable in his stance on both being
a team player and a genuinely good dude. More power to him for being a
role model, and a positive influence on those around him.

FJM & FM:
Why do you think so many rookie QBs are starting so early this season?
JB:
The NFL has gotten more and more athletic, I think. Plus, with the way
these teams are viewed as businesses, it’s a win-now league. I think
it’s had more GM’s and coaches a little more willing to roll the dice
a bit with these youngsters. Not to mention some of these guys just
sell more jerseys and fill more seats.

FJM & FM:
Compare a football locker room to the backstage area at a fashion
show: sights, sounds, and smells.
JB:
One thing’s for sure, you don’t see models head-butting or slapping
each other prior to walking onto a runway. More often than not,
backstage looks more like a lounge with champagne, hair and makeup
stations, and photographers everywhere. Hard to compare the smell of
hairspray with that of a locker room. Strangely, I’d still take the
stinky locker rooms any day!

FJM & FM:
We’ve always thought male beauty was more accessible when the male
body was being viewed as a subject rather than an object – a man
caught being attractive while doing something rather than
intentionally being attractive. How do you create images intended to
be beautiful while doing the latter? What kind of pep talks do you
give yourself?
JB:
You know, the only reaffirmation or pep talks I give myself tends to
be just reminding myself that I can only be me. Some will like you,
some won’t. You can’t change that – so don’t try. A personal motto,
“Be Present.” I try my best to be focused always on right now, engaged
in my tasks or in the people and situations I find myself in from day
to day. You can always better yourself as opposed to being bored.
Think that constantly pays off for me emotionally, physically, and in
most areas of life – not only work.

FJM & FM:
Which is more intimidating: the gaze of a camera, the audience on a
catwalk, or a stadium of fans?
JB:
I guess it depends on exactly what you’re gonna wear down that runway,
ha-ha. I think the stadium full of fans would have to trump modeling,
but the adrenaline can’t possibly match up either! I’d love to hit the
end of a tunnel and run out in front of 60,000 screaming fans!

FJM & FM:
“Rudy” – electrifying or cheesy crap?
JB:
“Rudy.” C’mon – has to be a classic. Electrifying! But I’d still
prefer to watch “The Program.”

FJM & FM:
An actor friend of ours tells a story about going on an audition for a
sports commercial and getting knocked on his ass in passing drills.
Any time you ever underestimated a fellow model’s or actor’s athletic
prowess?
JB:
Ummm, nope. Maybe I’m just that confident in the sports I play. I know
when it’s not my sport – soccer – I let the European and Latin friends
of mine take the lead.

FJM & FM:
What’s the best pick-up line you heard at a football game? And did it work?
JB:
Oh, no. This one’s good. Not sure I can remember one at a game, or if
I’ve seen a line work at one. Perhaps a football game would deserve a
raunchy one, though, huh? Try: “The word for the day is legs. Let’s go
back to your place and spread the word.” Ahhhh, terrible – couldn’t
help but share that though. Have a laugh and have another for anyone
that uses lines! I like the basic introduction, personally. It can’t
go wrong and it can achieve far more than a line.

FJM & FM:
Would you prefer modeling jock straps or compression shorts?
JB:
I’m pretty addicted to Under Armour for underwear. The compression
shorts is where it’s at for me.