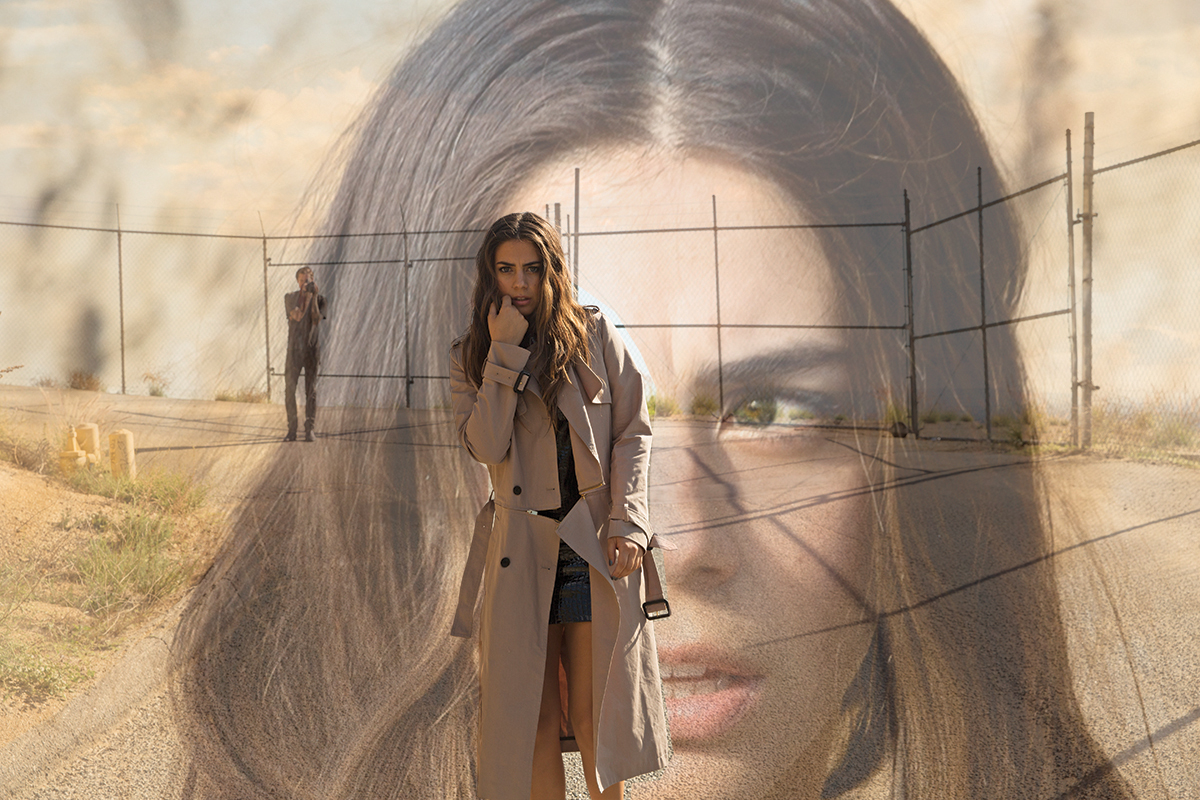 Photography by Daniel Trese. Featuring Lorenza Izzo and Nathan Kostechko. Styling by Leila Baboi. Images seen in the issue “Are You There Alone”

Despite appearing in some of the most chilling contemporary horror films, including Aftershock, The Green Inferno, Knock Knock, and the upcoming Holidays, an anthology of holidays gone tragically wrong, Lorenza Izzo remains an unexpected denizen of the genre. As a resident trash expert and a lover of extreme behavior as documented on my blog Filthy Dreams, I was fascinated by an actress whose eerily deep connection to horror translated to her marriage with notorious gore auteur Eli Roth. Talk about dedication to your craft. I wondered–was Izzo a morbid horror geek with a copy of Fangoria under her mattress, enjoying nauseating fantasies? Bubbly and infectiously enthusiastic, the 26-year-old Chilean actress openly admits that she frightens too easily to watch scary movies despite her grisly reputation. However, under her joyful exterior, Izzo possesses the uncanny ability to embody characters that delve into the audience’s deepest fears.

Izzo is currently living in New York while filming Feed the Beast, a highly anticipated new Clyde Phillips-helmed AMC drama focusing on two friends who open a restaurant in the Bronx. With the show’s premiere in May 2016, CRUSHfanzine spoke to Izzo about finally playing the psycho, working with her husband and her inspirations both on-screen and off.

In The Green Inferno and Knock Knock, your characters–Justine and Genesis–are polar opposites. How did you approach playing these two very different characters?

They couldn’t be more different and as an actor, that’s a gift to be able to be such different people. For me, it was a blessing. When I did The Green Inferno, I approached Justine in a realistic manner. I was lucky that one of my best friends was going to Columbia in New York when we were going to shoot the movie. So before the movie started shooting, I lived at Columbia. If you think about it, Justine comes from a privileged world–she goes to an Ivy League school and her father works at the U.N. It’s a very specific type of upbringing. I also got to go with her on her journey. I had never been to the jungle in Peru. We shot chronologically so I didn’t do a lot of acting–it was a lot of reacting. That was terrific for me to experience the whole story as my character did.

Genesis was a different approach. We went from being in the jungle in the middle of frickin’ nowhere to shooting in my home country in a house with three people –Keanu [Reeves], Ana [de Armas] and me. Before shooting, I thought, “Oh this is going to be so much fun and easy.” Oh no. You forget how in a movie like that it relies on the pacing, dialogue, subtleties, and looks. They’re such complex characters and it was important for Ana and me to touch truth. As an actress, I’m always aspiring to find truthful moments. Genesis comes from a very hardcore, dark, and difficult background. This is her defense mechanism. She’s a true feminist in her own very special way. I’m not going to lie–there’s great fun in playing the psychopath.

I’m glad you said that because I wanted to ask you if you enjoyed finally getting to play the aggressor in Knock Knock.

I wonder if, had I not played Justine, I would have enjoyed Genesis as much as I did. It felt like a bit of revenge for me. So much shit happens to Justine just for being privileged. The social message for me was that these very privileged kids from New York get their butts handed to them. I thought that was hilarious. In telling Genesis’s story, I tried to understand and not judge what Genesis was doing, which is my job. My job is to just tell her story and let you guys, or whoever’s watching it, come up with whatever theories you may have.

There’s a definite fearlessness to how you attack these difficult and often terrifying roles. Do you think risk-taking is integral to your work as an actress?

Completely. As an actor, you have to be OK with being embarrassed and vulnerable first and foremost. That is a huge risk. Human beings don’t want to be uncomfortable. All we do is avoid–you walk down the street stuck to your phone. I think that’s my thrill in it. Getting past being uncomfortable hopefully leads to being able to make someone laugh, cry, or talk about their discomfort. It sounds super cocky, but I feel that there is a responsibility as an actor to create some sort of movement, action, or reaction. I’ve taken a lot risks, both physical and mental.

Your husband Eli Roth directed both The Green Inferno and Knock Knock. What is it like to work with your husband?

When you work together, as soon as you step on set, it has to be professional. I’m the actress and he’s the director. For me, there is a slight advantage because I started working with him way back in Aftershock and Hemlock Grove, so by the time we got to Knock Knock and The Green Inferno, there was an awesome base of trust where with just a slight look I knew what he meant. You get comfortable and I know he can push me to places that I didn’t even know I could go to.

Now I’m on a new project and I’m like, “Oh my god, I better step it up!” I love working with different people more than anything. At the same time, I was able to grow by working with my husband. It could have gone really wrong. I don’t think a lot of people can take orders from their significant other who they already see 24 hours a day. In our case, it works out. I really admire him and think he’s a truly brilliant storyteller. Right now we’re going our separate ways, but I’m sure we’ll work again at some point. Maybe I’ll direct him.

With your work in horror movies, you’ve been labeled a “scream queen.” How do you feel about this label? Do you embrace it?

The truth is I don’t really think about it. I don’t get offended by being called a scream queen. I don’t think there’s anything wrong with being a scream queen. I have done a lot of horror movies, which is extremely ironic because I hate watching horror movies. I can’t watch them because I get so terrified. I have fun doing them and I think that particular genre has something very special to it because it resonates universally. Fear is something you can tap into no matter the culture, whereas romantic comedies and dramas are a bit trickier in that sense. I have done a variety of things, but horror has been the most buzzed about. I’d gladly take the crown of the scream queen–it has the word queen in it. The horror community is such a good and loyal community–they’re really the best fans.

You say you don’t like watching horror films, what is your favorite genre? What do you like to watch?

That’s hard. I love romantic comedies. I love Woody Allen movies. My favorite comedy is There’s Something About Mary. I love the Coen Brothers’ movies. I’m also all about dark movies like The Man Who Fell To Earth. I have a weird eclectic taste. It’s actually grown more and more since I’ve been with my husband because he has such a massive knowledge. He’s like a walking library, and I’ve discovered so many movies. One of my favorite films is Betty Blue, a French film. It’s an amazing film. Horror movies still give me nightmares though. I understand the thrill, but I cannot watch them. I literally cover my eyes. I have more fun watching movies that either make me laugh or keep me thinking. My favorite film this year was Gaspar Noé’s Love, which is a very interesting and crazy love story. It’s controversial. I don’t understand why, but I guess because we live in a society that has a lot of rules. The way he portrays love was truly raw and realistic.

Besides film, what inspires you?

People. Especially now that I’m in New York, all I do is watch people. I’m one of those weirdoes who just walks around observing people. I do it for a living. I have to incarnate different people. It’s always a version of myself, but I love taking from people. People are very inspiring beings, as weird as that sounds. This is our medium. We are the ones breathing, eating, talking, destroying, building, and I grab inspiration from them, from us.

You originally studied to become a journalist before you began acting. If you weren’t an actress, what do you see yourself doing?

Hosting a Good Morning America-type TV show. Again, I love talking to people. I was so torn when I was 18. I wanted to be an actress as bad as I wanted to host the Buenos Dias a Todos in Chile, which is their version of Good Morning America. I love communication. Of course, it’s the most basic and primal tool for human survival. At some point when I was in college, I realized that the more fiery passion was in acting, not in journalism.

You have two exciting upcoming projects. First, you’re starting to work on Feed the Beast. How do you like working in television rather than film?

I had done a couple of episodes of Hemlock Grove and I did a pilot for NBC called I Am Victor with John Stamos, so I had a little bit of experience with TV. I’m a TV addict. My favorite shows are Homeland, Breaking Bad, Mr. Robot and now, The People v. O.J. Simpson. I just watched that last night. The whole cast for Feed the Beast is just ridiculous from Michael Gladis to Jim Sturgess to David Schwimmer. There’s nothing like it out there so I’m excited to do it. We’re shooting ten episodes, which is very exciting in the pilot season world, during which time you have to go through the grinder. The fact that I’m skipping that is so bizarre. I still wake up thinking I have to go on all these auditions.

You’re also starring in Holidays and will be in the New Years segment directed by Adam Egypt Mortimer, which is funny because I never imagined New Year’s as scary. What holiday scares you the most?

I love holidays. I’m a holiday freak. I’m one of those annoying people that when Thanksgiving is five weeks away, I’m already buying the turkey. For me, I’d say Thanksgiving because Eli and his best friend Jeff Rendell did a fake slasher-type trailer for Grindhouse called Thanksgiving. That’s the only one I can picture as sort of scary. Halloween is so much fun. New Years is so exciting and Christmas is my all-time favorite. I go nuts for Christmas. I go psycho for Christmas. 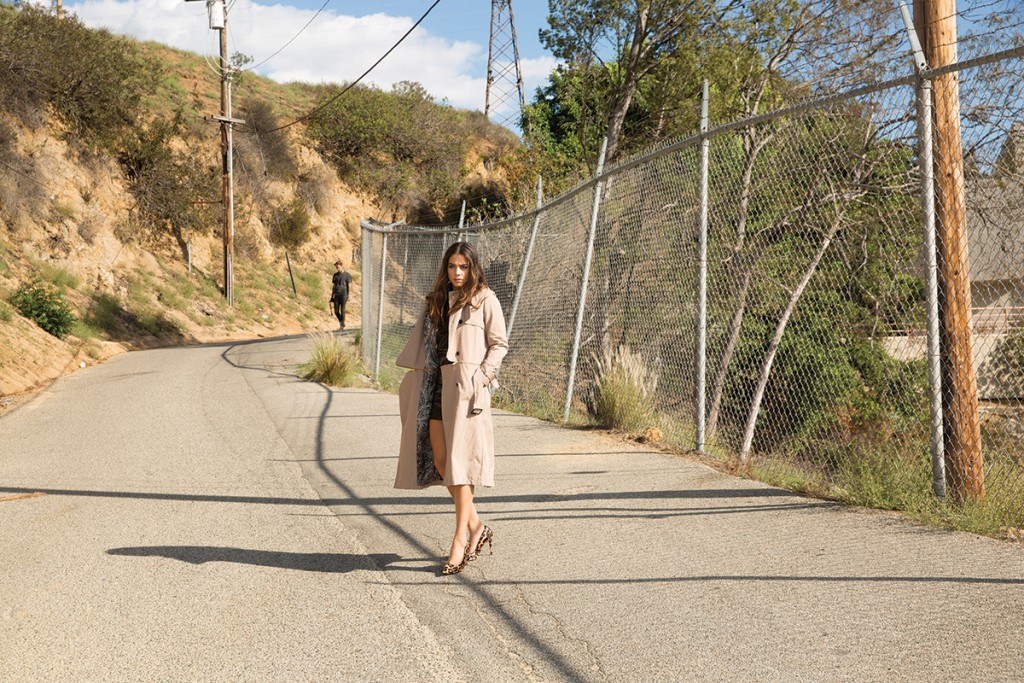