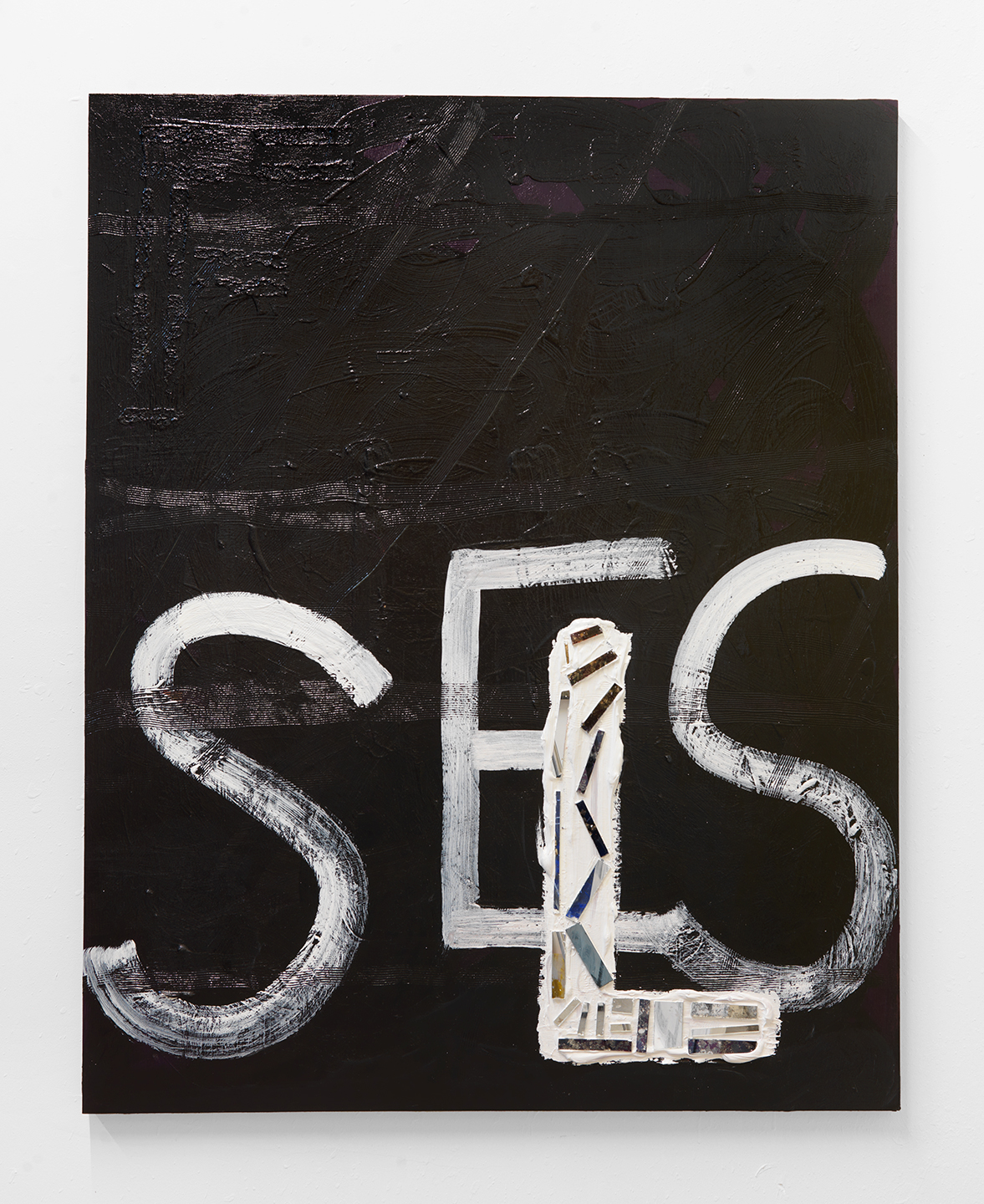 All install images courtesy of the artist and Diane Rosenstein Gallery. Portrait of Samuel Jablon by Marcus Cooper.

Sam Jablon — a good friend of mine — writes his paintings. They begin with a deceptively simple group of words. Through the process of editing, the painting is built up in multiple layers of acrylic. Letters are pushed to the foreground, some bedazzled with jewels or shards of mirror; others are erased, but their trace remains. The poem-paintings are extremely physical, often completely covered over, or sanded down, or built up thickly. They’re painted fast, but take a long time to resolve themselves in the studio.

During a recent visit, Sam and I spoke at length about his work, amidst the work in process as he prepares for his first solo exhibition in Los Angeles with Diane Rosenstein entitled “Over Heard”.

Stephen Truax: You trained originally as a poet at Allen Ginsberg’s Naropa University in Boulder, CO. When you first moved to New York, you were aspiring to be a poet, not a painter, is that right?

Samuel Jablon: Yes, that is mostly right. When I first came to New York I was an aspiring poet who made paintings on the side. The writing process is actually the first part of making a painting. The phrases act as a structure for the paintings, and then the process of painting through color, material, and texture render the text to be borderline illegible.

SJ: The works are legible but difficult to make out. They are paintings. If you want, read them. Or, just look at them. Both are options.

ST: I know each solo show you’ve made is accompanied by a group of poems that are directly related to the paintings. Additionally, their titles in the checklist work or read as a poem. Can you describe your writing process?

SJ: It starts off by observing my surroundings. I love how John Cage used everything around him to compose music, and I think it is important to pull material from life.

I will walk around the city and write things down that I overhear or see on advertisements. After I gather text, I’ll go to the studio and start editing and combining what I have. I look for things that are cheeky, sarcastic, ominous, common, and optimistic.

I am interested in the push/pull of legibility and painting. The text in this body of work becomes painting more so than any other show I have done.

ST: The texts seem to be nihilistic: Nothing Nothing Nothing, one reads; another, Everyday Nothings. I get texts from you all the time, like, “What do you think of the title Everything Living Dies?” You say they’re optimistic. What is the tone of these works?

SJ: I do send you a barrage of texts… fair enough. There is a sinister, pop, and optimistic quality to the phrases I choose. I don’t think life is meaningless, or that the works portray the meaninglessness of life. If you have nothing you still have something, but maybe it’s not exactly what you want. The text Everything Living Dies came from overhearing one person asking another person if trees die. The response was, “Everything living dies.”

ST: Are these texts autobiographical?

SJ:  What’s happening in my life events usually does set the tone of the text and paintings, but I would not say they are strictly autobiographical.

ST: Your paintings are whimsical, colorful, fun; their form contrasts strongly with their written messages. This simple switch-up reminds me of good pop music. Catchy tunes sound happy, but their lyrics are devastating. “Walking on Broken Glass,” for example, starts with an upbeat piano, and Annie Lennox admits, “Since you’ve abandoned me / My whole life has crashed.” Christine McVie sings, “I’m begging you for a little sympathy / And if you use me again it’ll be the end of me,” over a happy-go-lucky acoustic guitar in Fleetwood Mac’s “Say That You Love Me.” Can paintings achieve the same kind of double message?

SJ: The desperation of a good pop song is tragic and beautiful. I think paintings can and do achieve multiple interpretations. I like the idea of paintings with subliminal messages.

ST: Certain texts repeat so frequently from painting to painting that the words begin to become forms rather than words that communicate a specific meaning. Is repetition a tactic to focus on painting, rather than writing?

SJ: Yes, if I have use a text several time it basically loses its meaning for me, and allows me to focus on the painting.

SJ: I wouldn’t say it is an excuse to make paintings. Why would one need an excuse to make paintings? The text in those works refers to a sort of day to day existence. It’s like sitting in a train car and watching surroundings pass by. Most of the time you see something boring, but every now and then you pass by something that captures your attention, and then it’s gone.

Samuel Jablon: Over Heard, will be on view at Diane Rosenstein, Los Angeles, from September 10 through October 15, 2016. 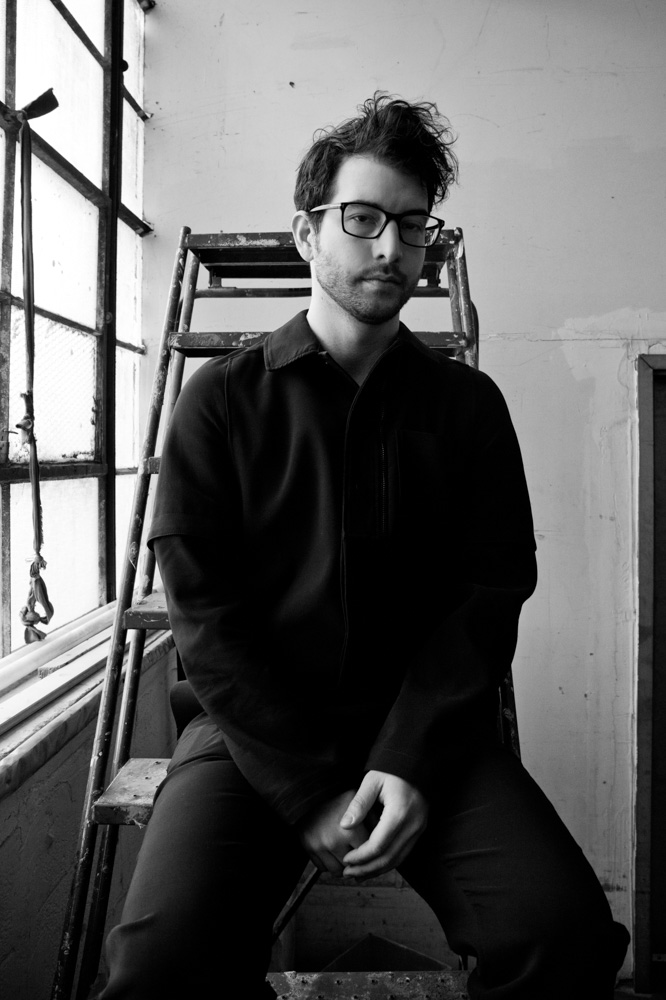 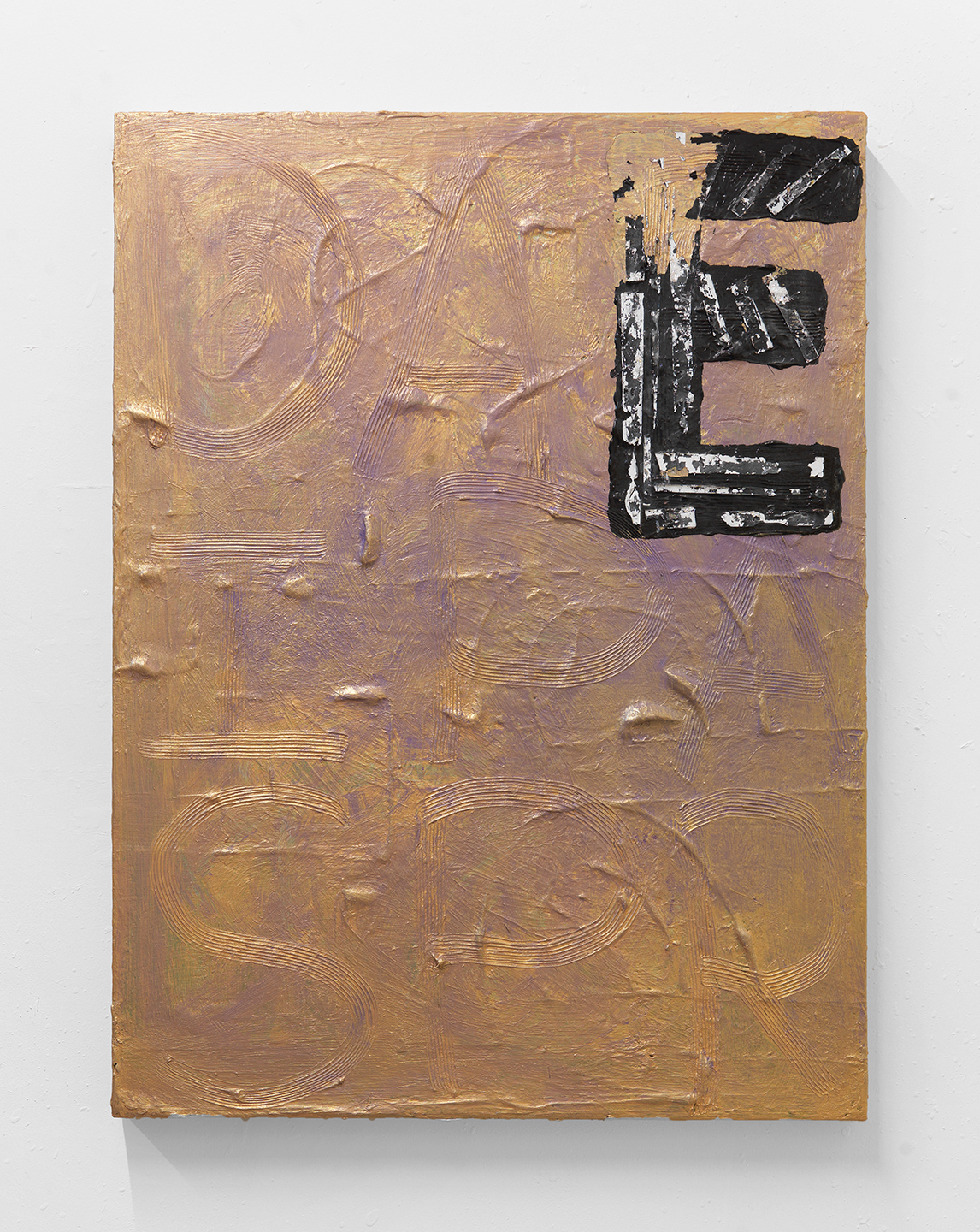 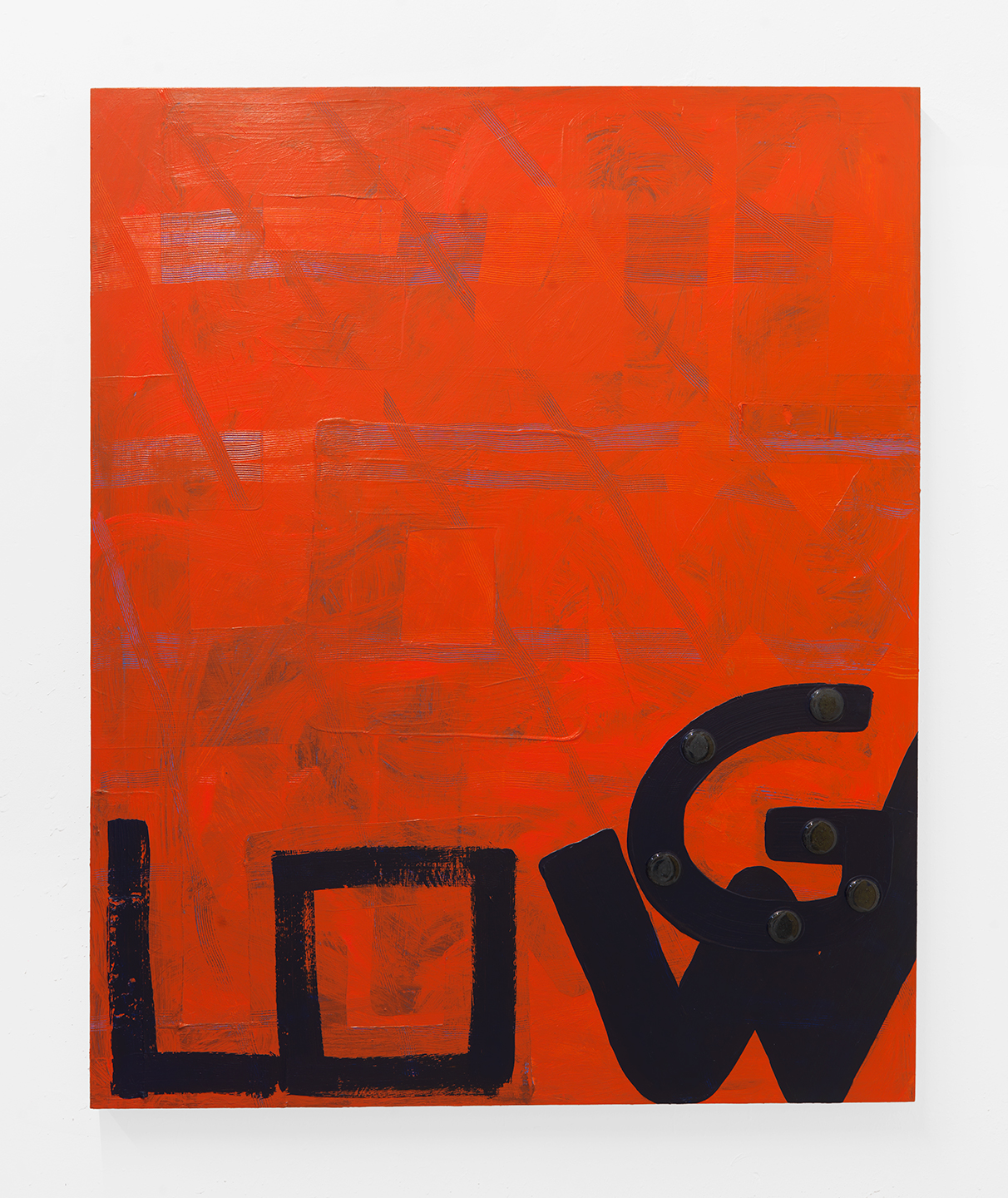 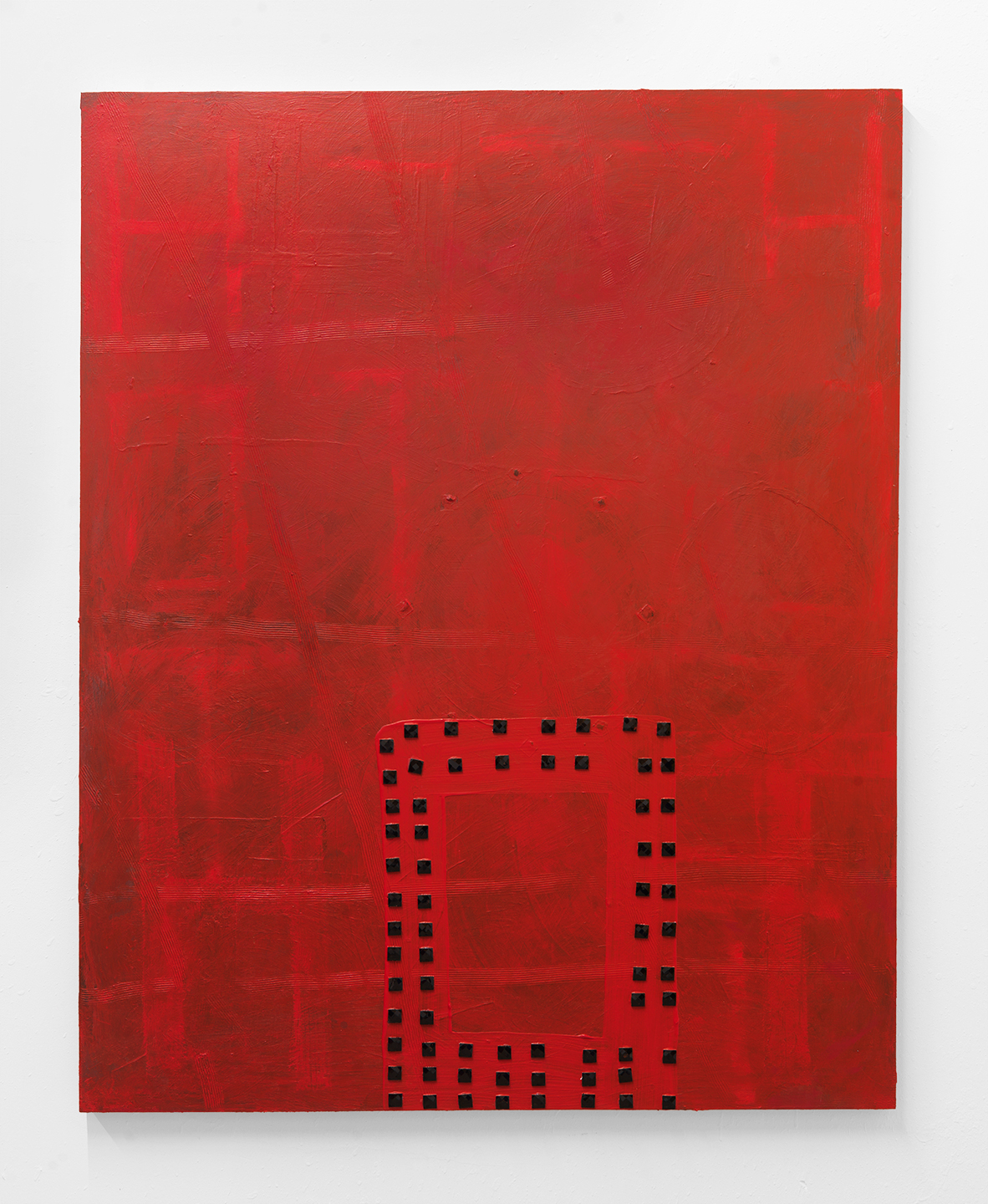 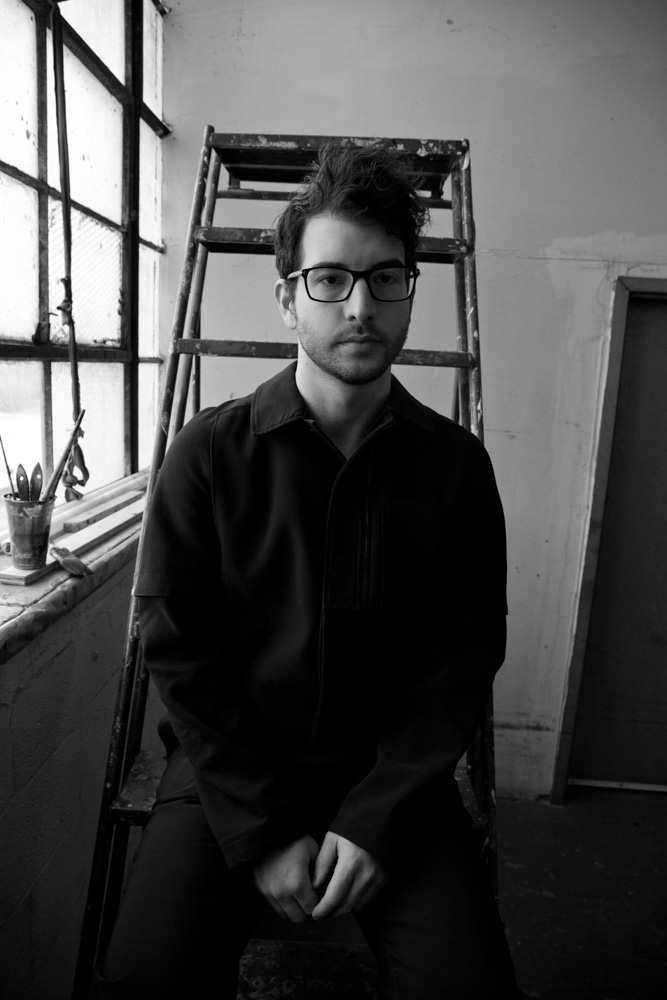